This review is a big one for me, as it marks the one year anniversary of Sean’s Skillet. While the actual day isn’t until the end of the month, this blog began on October 30, 2016 with a review of Baskin Robbins’ Treat Oreo Treat Dark, and since then writing about the Flavor of the Month has been the only constant recurring series I’ve done – a true labor of love. Although BR are the biggest scoop shop chain in the world, they get largely overlooked by real ice cream aficionados, and a lot of the folks that I observe frequenting the shop stick to the classics or one of the 30-40 varieties that are familiar in the dip case.

I love Baskin Robbins, I grew up going there and have always been fascinated by the limited flavors and some of the incredible seasonal’s like America’s Birthday Cake. For years my October would truly feel real at the sight of Oreo’s with orange creme, and they are put to no better use than in the Baskin staple Trick Oreo Treat. Much like last year, BR are keeping the original TOT as a seasonal offering and bringing us an all new Halloween themed scoop to welcome the spookiest time of year. Candy Bar Mashup combines Snickers, Milky Way, and Twix in chocolate ice cream swirled with a caramel ribbon.

The chocolate base is very standard in terms of its flavor, but immediately jumps out at me as feeling lighter than what I’m used to. It has a mellow, creamy chocolate presence that isn’t very exciting or offensive, but the lighter texture is a bit distracting. While I would never consider BR to be super premium, I am used to them being fairly close to the density of Ben & Jerry’s, at around 15 grams of fat per serving, and this is inching closer towards Dreyers territory (but not nearly that thin, and not gummy at all). Baskin Robbins do offer some amazing chocolate in Mississippi Mud and Superfudge Truffle, but this base is incredibly basic, and unfortunately, boring. 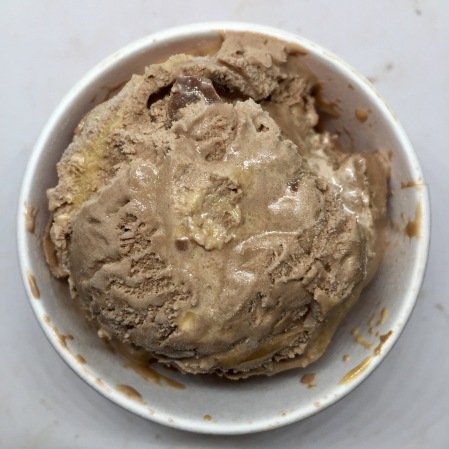 The mix-ins bring a bit of halloween flair, but let’s be honest, where are the peanut butter cups? The Twix pieces are exactly the same as this years’ Made with Twix, which utilized separate pieces of the shortbread cookie covered in chocolate with no caramel. These pieces are the most prominent mix-in, at least in my scoop, and have the wonderful buttery crumbly crunch of the Twix cookies that add a little bit of intrigue to the relatively flat chocolate. The caramel swirl is minimal but present with the occasional gooey sweet highlight that naturally compliments the cookie very well.

Snickers and Milky Way are definitely the co-stars here, and make only a few appearances in my cup. The pieces are significantly smaller than the Twix, and the Milky Way are only identifiable by their oddly hardened nougat-caramel combination and don’t really stand out against the already present chocolate and caramel. The baby chunks of Snickers bring a slight fatty peanut pop, which is great, but leaves me asking again – WHERE are the PB cups?

While Candy Bar Mashup isn’t a failure by any means, it feels pretty safe, uninspired, and lacking in any true spooky holiday whimsy. I wish Baskin Robbins had brought back Trick Oreo Treat Dark, who’s dark fudge ribbon really set the flavor off to indulgent depths that this mashup only wishes it could touch.