Coolhaus are a small “architecturally inspired” Los Angeles based gourmet ice cream company founded on making big, craft ice cream cookie sandwiches, or, “cool houses”.  While their sandwiches are the main attraction, their pints have started popping up in Northern California grocery stores, and are now getting distribution in 4,000 stores across the United States, Asia, and the Middle East.  They are a quickly growing company that are simply too hot to ignore, and I was excited to find some of their flavors at my local Safeway.  After perusing all of the options I decided to make my first foray into Coolhaus with something you don’t see too often – Bananas Foster – which combines banana ice cream with a rum-spiked dulce de leche swirl.

The banana base is great – smooth and creamy with a light but very authentic banana flavor that tastes natural and absolutely nothing like a banana Laffy Taffy.  It isn’t over the top sweet and leaves some room for pleasant vanilla undertones to come through and round out a lovely tropical flavor.  The problem is the flavor is almost so subtle that after a couple spoonfuls it fades away and I’m left with more of a clean vanilla or sweet cream taste than the banana I started with.  The texture is still on point but the dwindling flavor makes it less enticing to want to eat more.

The rum spiked dulce de leche swirl is also tasty but lacking in some execution as well.  What I like about it is that the texture is nice and thick like a condensed milk, differentiating it as a dulce de leche rather than just a caramel.  It isn’t too sweet but there is also almost no rum flavor whatsoever.  Maybe the rum is tempering the sweetness, but I was hoping for at least some amount of boozy kick and I’m just not finding it.  The swirl also isn’t incorporated very much into the ice cream, predominantly running down the sides, which means I have to dig and scrape the sticky stuff rather than encounter it while eating and that takes a little bit of the fun away. 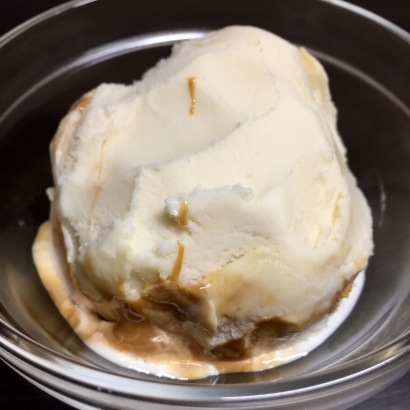 Both elements in this pint are of high quality with great texture and subtle restraint, but just missing the mark to give that wow factor I was hoping for.  There’s no doubt Coolhaus makes a solid product, but this flavor needs some kind of crunchy textural element like brûlée-d sugar  and/or more swirl to really take it to the next level.