While it’s relatively commonplace to find fun seasonal flavors from all the big players in the grocery ice cream game like Breyer’s, Dreyer’s, Haagen Dazs, and Ben & Jerry’s, it’s a much more rare feat to come across a higher end brand sneaking a seasonal release into the frozen aisle. Oftentimes a craft-leaning brand will only get the most likely to sell and core flavors at a store, maybe 4 or 5 varieties tops, and all the special ones will need to be ordered online or picked up at a (non-existent on this coast) scoop shop. A fortunate outlier to this equation has popped up, likely due to the mainstream infatuation with everything pumpkin, and at my local Whole Foods I was able to score Graeter’s spin on the trendy flavor, simply dubbed, Limited Edition Pumpkin. 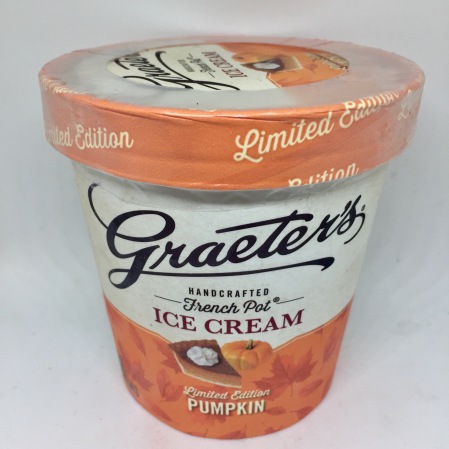 As expected from a super premium high fat ice cream, the texture is incredibly smooth, creamy, and dense. The flavor is sweet, subtly spicy, and mostly notably pumpkin-pronounced. The finishing note is pure squashy goodness and carries one of the most authentic and vegetal pumpkin flavors I’ve ever had in ice cream. There are notes of cinnamon, ginger, and nutmeg, but they definitely take a backseat to the gourd-forward ensemble of flavors in the container.

It shouldn’t come as much of a surprise that Graeter’s, a company that prides itself on presenting classic, mostly refined and uncomplicated flavors executed with pure richness, went a very straight forward route with their pumpkin ice cream. The flavor is simply called “Pumpkin” and not “Pumpkin Pie” or “Pumpkin Spice”, so the spice being more of an undertone is exactly as advertised; but it also limits how good this ice cream can be. Similar to a very well executed vanilla, no matter how good it is it can’t compete with more complex flavors that incorporate multiple textures, mix-ins, and techniques to create a more engaging pint.

I would love to see a company with very high quality base ice cream like Graeter’s incorporate a caramel swirl or a white chocolate spin on their renowned chocolate chips to bring some extra textural contrast and depth to their fantastic pumpkin flavor. I don’t want to call this one “boring” because it’s very well done, but it isn’t the type of pint I need to seek out year after year as it does’t satisfy any urge a solid pumpkin pie filling can do perfectly well – especially at the higher price point.

Mtn Dew VooDew Mystery Dew 2022 Zero Sugar taste test! ⁣
Krispy Kreme came out of the gates HARD with fall-inspired doughnuts before anyone else, and its third drop of the season features three brand new autumn goodies running until October 9. ⁣
Are new @ruffles Ridge Twists as fire as the first non-twisty basketball inspired chips?! Let me know if you’ve tried them!! 🔥 ⁣
One of my all time FAVORITE @butchershopbakecompany cookies is back after TWO YEAERS of pleading for its return! You’ve got 3 days left to get it along with my PB Banana Madnees collab! Code ses10 saves ya 10%! ⁣
It’s the last week for the @saltandstraw Harvest Festival Series! Check out my review of one of their newest wild cheesy cinnamon-y pints!! ⁣
Honestly, the only thing scary about this cookie is that this is the last week to order it! BOO THANG from BSBC is a brown sugar pumpkin base with caramel, white chocolate, donuts, and Java Oreo, stuffed with salted caramel macchiato buttercream, and topped with a white chocolate drizzle.
Loading Comments...
%d bloggers like this: