Taking a hot, melty, crunchy dessert usually made over a fire and turning it into a frozen treat is no easy feat – and that’s why so many of them fail. Surprisingly, the best mainstream version of s’mores ice cream comes from a convenience store – 7-11, and a lot of attempts miss out on one or more crucial element that make s’mores so damn delicious. As the mint-dominated wonderland of holiday flavors begin to takeover the flavor of everything in sight I thought it would be nice to have one last summery taste of a take on the tricky profile. Coolhaus’ Campfire S’mores combines a salted tahitian vanilla bean ice cream with a graham cracker cookie butter-marshmallow swirl and dark chocolate squares.

Salted vanilla bean ice cream? Not quite, but the base is still pretty tasty with a great vanilla bean flavor. Having had a number of great salted bases this one doesn’t really jump out at me as being salty at all, but it does have a nice balanced sweetness to it that maybe is the result of the presence of some salt. The texture is a little strange – it has a fluffier consistency that I normally associate with lower quality ice creams, but it isn’t super gummy or offputting, more smooth and creamy but light. In a weird way it kind of reminds me of gooey marshmallows and I even get hints of graham in the flavor like all the s’mores’ elements are being channeled in some odd maybe intentional maybe accidental way.

The most interesting part of this pint, and the one that is a true mouthful, is the graham cracker cookie butter-marshmallow swirl. When I read the description I was bummed they didn’t do two separate swirls, and I read “cookie butter” as translating to speculoos, but it isn’t spicy at all and the cookie butter execution surprisingly works. It’s a cookie butter made with graham instead of the notoriously spicy cookie, and its texture acts as a way to provide the marshmallow-y-ness a s’mores should have. It’s kind of cheating but ultimately pretty good, as it gives a smooth buttery character with graham flavor and a pretty poppin’ sweetness that stands out strong – and there was quite a bit of it integrated through the whole container.

The dark chocolate squares are pretty average but serve their purpose. Medium-sized with a good cocoa bite, but ultimately kind of dry and unremarkable in the grand scheme of chocolate chips. They have a solid crunch to them but I don’t want crunchy chocolate anywhere near my s’mores, and without a bit of melty-ness to back it up they wound up being my least favorite component in the flavor, even though I do appreciate their dark bitter flavor. 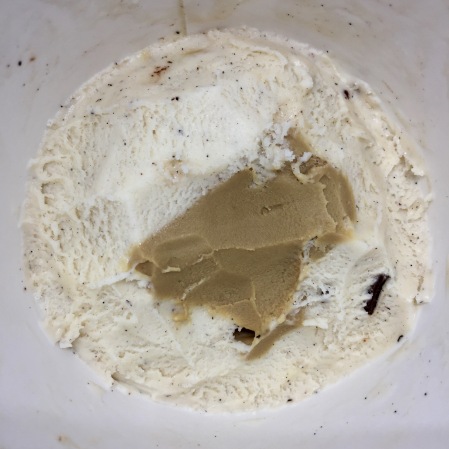 This is a solid pint of ice cream, and I like it a lot more than the Bananas Foster I initially tried from Coolhaus. Even though it doesn’t deliver on all the campfire magic of a true s’mores, all the elements are represented and I appreciate the creativity that went into the flavor as a whole, especially with that graham cookie butter.