My experience with Kashi cereal goes something like this: I was told I needed to get some more fiber in my diet so I bought a box of GOLEAN Crunch! I had a serving or two, it tasted pretty good, and then I proceeded to have the most intensely loud and continuous gas of my life for the next two hours. I’m not kidding, I farted for HOURS, and I had my roommates try the cereal to make sure I wasn’t insane. Shortly after munching, they proceeded to audibly explode. I tried it again a couple of days later, and sure enough, I erupted just like before, and I decided in that moment to stay the hell away from Kashi…until now. Brand new to the healthy cereal aisle, and impossible for my cinna-dar to ignore is Kashi’s Cinnamon French Toast.

The cereal is super dense and puffy with a massive satisfying crunch, subtly sweet cinnamon flavor, and absolutely beautiful aroma. The taste is soft but really great with a mellow cornmeal presence rounded out by vanilla and a wonderful maple finish that does well to channel french toast. The more mellow sugary-ness heightens the robust earthy flavor of cinnamon compared to a classic like Cinnamon Toast Crunch, which relies more heavily on a sweet buttery flavor. The thicker, denser makeup of the cereal pieces really does remind me of french toast, which is usually a bigger, heartier piece of bread as compared to regular toast.

The creamy presence of milk works well with the spicy maple-leaning flavor and adds a little extra sweetness for a very well rounded bite. It also helps to emulate the typical custard soak of french toast and adds a touch more authenticity to the concept of the cereal. The bigger, crunchier cereal pieces can also really hold their own in milk. No joke I let them sit for over five minutes and they still had a solid crunch. Once the liquid is absorbed the cereal even has a bit of french toast fluffy squish to it that drives the concept home without losing any of its great cinnamon flair. 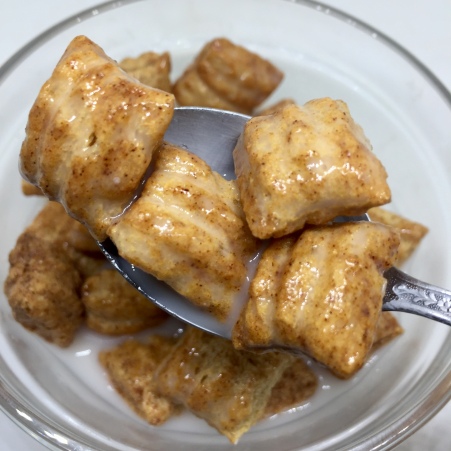 In short, I’m admittedly no expert on Kashi or healthier breakfast cereals, but this stuff is really damn good; essentially a mashup of two of General Mills’ successful toast lines with a much less aggressive sweetness. Wonderful toasty pillows that are everything a bowl of cereal should be – voluminous chomping delight with a bit of good nutrition to boot.