“Sweet dreams are made of these. Who am I to disagree?”

Those simple lyrics from Eurythmics are all that played through my head the moment I got news of one of the most unexpected and fantastical collaborations in cereal history – Lucky Charms Frosted Flakes. This teaming of two titans seems completely illogical and insane. One cereal is made by Kellogg’s while the other is General Mills. The existence of this mashup would be like if Pepperidge Farm released a Milano filled with Oreo crème; it simply doesn’t make sense! Yet, it happened, it’s here, and it truly is a sweet dream, because this stuff is goddamn delicious.

Lucky Charms Frosted Flakes is made by General Mills, which means they essentially made their own version of the iconic iced corn cereal and tossed it in with their best-of-class magical marshmallow medley. That seems easy enough to do, since many cereal’s use a frosted corn component of somesort, but the hijacking of the name is what really sets this bowl apart. I don’t know how they did it, but they did – box color, logo font, and all.

The frosted flakes are very similar to the ones Kellogg’s produce – sweet, corny, and crunchy with a bold texture that holds up very well in milk. From my memory I feel like these are slightly thicker than the ones normally pushed by Tony the Tiger, but I’ve gotta be honest it’s been quite awhile since I had a box of regular ‘ole flakes. The Lucky Charms ‘mallows are exactly the same as the one’s you’ll find in a regular box of charms – aerated, sweet, crunchy with lovely poppin’ colors that make any breakfast feel that much more fun. 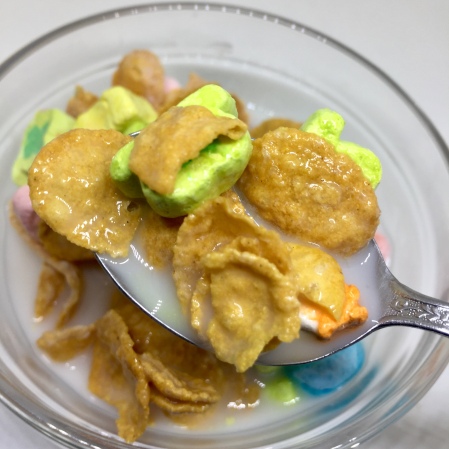 I really like this seemingly spontaneous collab from General Mills, and while I’ve always been a fan of both cereal’s on their own, they might be even better mashed into one box. Yes, it’s pretty intensely sweet, but the corniness is a welcome addition to the usual oat-dominant Charms, and the layers of crunch are super satisfying in milk or by the handful. Products like this are exactly what make junk food so fun and intriguing – playing at nostalgia and whimsy with legitimately good flavor, and for as weird and niche as it is, I hope it sticks around for me to grab another box.

My third flavor collaboration with @butchershopbakecompany has arrived and it’s a flashback to simpler days. 𝗦𝘂𝗺𝗺𝗲𝗿 𝗦𝗰𝗵𝗼𝗼𝗹 is a rich chocolate cookie loaded with chocolate chips, Oreo pieces and chocolate cake, stuffed with chocolate buttercream and rolled in Oreo cookie crumb, topped with a gummy worm.⁣
it’s time to stuff that crust with even more stuff!! check out my review of the latest limited offering from @littlecaesars today on @theimpulsivebuy! ⁣
Outside of the iconic yellow cake with chocolate frosting and coveted funfetti, German chocolate cake has been a favorite of mine for over 20 years. Full disclosure: I’m biased as hell when it comes to this type of cake, and I absolutely love this bar-ified spin on the flavor from @lifesabaatch . A graham cracker blondie base layered with Mounds candy bars, coconut pecan filling and a chocolate cake batter blondie mixed with chocolate chips, toasted coconut and candied pecans, drizzled with chocolate the topped with more toasted coconut. ⁣
happy national doughnut day! ⁣
No, this isn’t the top superficial layer of a premium craft ice cream pint, it’s a mini tub of edible cookie dough from @lifesabaatch . 𝗣𝗶𝘀𝘁𝗮𝗰𝗵𝗶𝗼 𝗣𝗮𝗿𝗮𝗱𝗶𝘀𝗲, to be exact — pistachio cookie dough mixed with dark chocolate chips and Heath toffee bits, swirled with loads of caramel, covered in dark chocolate ganache and topped with chopped dark chocolate pistachio toffee.⁣
𝗕𝘂𝗻𝗱𝘁 𝗜𝘁’𝘀 𝗔 𝗖𝗼𝗼𝗸𝗶𝗲 is a simple and fun concept: big half pound cookies stuffed with goodies and baked in the shape of a mini bundt cake. The cookies not only have a cool visual appeal but a unique contrast of textures from the bundt tin — the outside is firm and crisp, almost like a hardened but not burnt/overdone shell, with a softer and gooier but fully cooked inside. It’s cute and different and I love it. ⁣
Loading Comments...
Comment
×
%d bloggers like this: