I’ve covered a lotta funny protein things on this website. Bars, spreads, cookie dough’s, cookie’s, pancake mixes, microwavable muffins – you name it, I’ve probably had it. Protein-infused chips, however, as many times as I’ve enjoyed them, have never found their way onto the Skillet. Quest’s original line of Protein Chips emulated the potato variety and come in a number of flavors from BBQ to Sour Cream and Cheddar to Salt & Vinegar, and I actually quite enjoy them all. I don’t love any of them but none of them are offensive and they make for a unique crunchy way to get a bit of protein in at lunch or snack time. With all that being said, I’m way more of a corn chip guy than a potato chip guy, and brand new for 2018 Quest have taken on one of the biggest snack dawgs in the yard with Tortilla Style Protein Chips.

I can’t believe I’m saying this but these Nacho Cheese protein chips are pretty much spot on. The flavor is almost identical to Dorito’s classic Nacho Cheesier with an unmistakably cheesy saltiness that sings with artificial junk food precision. They don’t have the ideal corn-based finish, being that they’re made up mostly of milk and whey protein, but the seasoning is so dialed in that I don’t really miss the slightly greasy corn crunch. I’m also very pleasantly surprised that there’s no weird artificial sugar flavor anywhere to be found, and Quest has legitimately succeeded in making a tasty savory protein-packed snack. 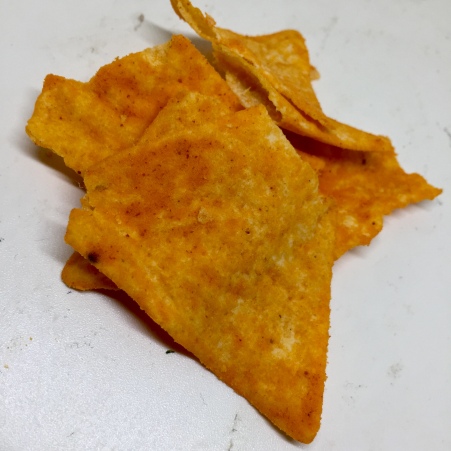 The texture is softer than an actual tortilla chip but slightly firmer than the original line of Quest’s “potato” chips. They have a gentle but solid crunch that’s a bit airy but very satisfying. The chip’s are definitely pretty fragile, and even though I was very careful in getting them home, there were more pieces than actual chips inside the bag. For the nutritional trade off these are a smashing success and if someone put them in front of me as off brand or “light” Doritos I would never guess they had 18 grams of protein per bag.

Quest’s Ranch flavor of tortilla chips have even MORE protein, clocking in at 19 grams instead of 18. When first biting in I’m immediately reminded of their Sour Cream and Onion “potato” chip, but as the flavor evolves it really does taste like Dorito’s Cooler Ranch. The finish has a clear buttermilk zing with hints of garlic, dill, and tomato that brings me back to my favorite blue bagged non-spicy chip; which even has the same red, blue, and green speckles in the seasoning as the classic.

The texture is identical – a soft crunch with a bit of airiness, but again, it’s overall very satisfying. The seasoning as a whole is a bit lighter than the Nacho, and as a result I can taste more of the chip base, which is a little sweet but not in a gross Stevia kind of way. It’s hard to pinpoint exactly what it reminds me of but I think it’s the slightly buttery yet sweet flavor of Keebler’s Club crackers, and while it’s a far cry from an actual corn tortilla chip, it’s tasty, and I would definitely eat these ones again too.