For a very long time (at least 7 or 8 years), the Flavor of the Month at Baskin Robbins in October was Trick Oreo Treat. Until, of course, 2016, when this blog started and the first review was of the slightly modified and awesome Trick Oreo Treat Dark, followed up by last years okay Candy Bar Mashup. The flavor never disappeared, it always came back as a seasonal offering, but this year, much in line with Baskin Robbins’ recent lazy tendencies, it’s back in the prime time dip case slot with advertisements and hype galore. Since it hadn’t been the featured flavor it never got properly pinned on the skillet, so even though I’ve loved it in the past and found it a bit underwhelming in 2017, I’m gonna give it another go for the sake of my people. Trick Oreo Treat is described this year as “the ultimate Halloween haul” combining vanilla ice cream with orange crème filled Oreo pieces, Baby Ruth pieces, and Butterfinger pieces.

Before I dive into the actual taste, I just want to state that aesthetically I love this ice cream, and my spooky lovin’ ass has always loved the concept. Halloween orange filled Oreo’s will always be one of my absolute favorites, along with the short lived light blue that never makes an appearance anymore, and their extra pop of color brings new live to the usually blasé cookies and cream visual. All that being said, BR’s vanilla base is just fine, and while it’s far from bad it’s also far from extraordinary, and the success of the flavor lies pretty intensely in the density of the mix-ins. 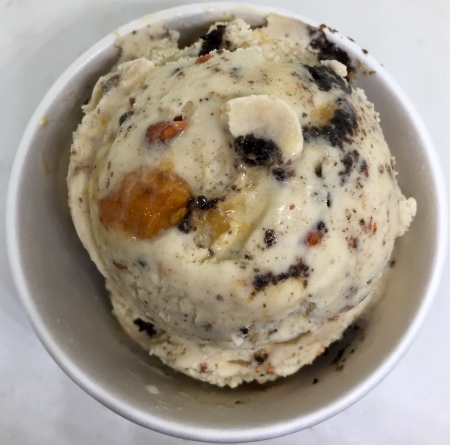 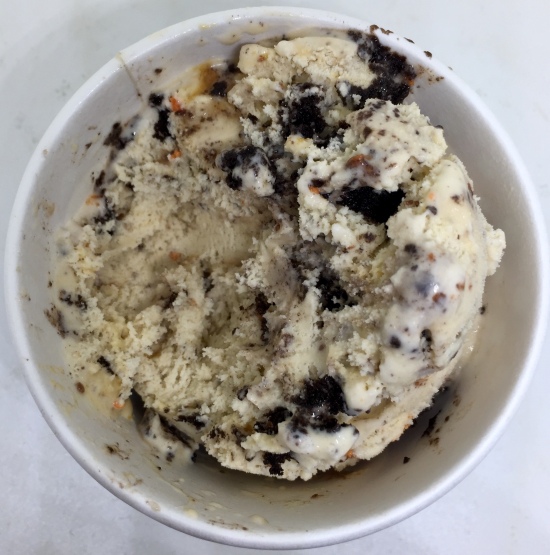 For the third year in a row the density seems far less than it used to be and I’m pretty underwhelmed by the experience. There’s a couple of awesome super creme-filled Oreo pieces, but beyond that I got almost none of the candy I was promised. Butterfinger is one of the ultimate Halloween candies. Not only is it black and orange, but it’s one that I truly do enjoy but will seldom buy a whole bar by choice. When Trick Oreo Treat is firing on all cylinders that buttery peanut flavor cuts through the vanilla brilliantly, but once again, just as last year, I’m left with mere whispers of the taste I’m looking for. 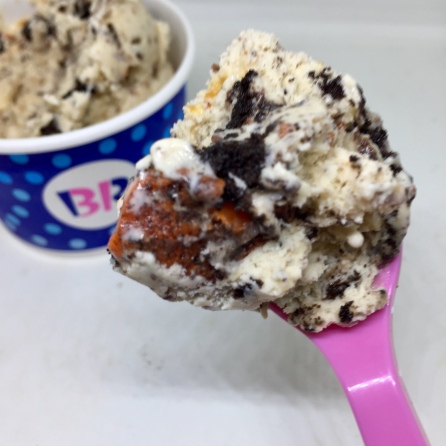 The major wild card element of this flavor are the Baby Ruth pieces, and I actually think Baby Ruth is a pretty underrated bar that’s one of my other trick or treat all stars. The problem with them is in ice cream they can seize up and get crazy hard, unfortunately in this scoop, again, just like last year, I didn’t even get a single bite of the Babe, and missed out entirely on the chance to break my teeth. I’m not sure if the quality has gone down or my expectations got way higher, but as far as I’m concerned this is just a fancy lookin’ cookies and cream that continues to break my haunted heart.