END_OF_DOCUMENT_TOKEN_TO_BE_REPLACED

At times silly, at times successful, and always divisive, the protein cookie game is an ever growing, and now evolving, market. While the end goal for most companies has been to produce a product that most closely mirrors a soft baked homestyle chewy craveable cookie, Buff Bake are pushing the field into uncharted and beloved territory – the Oreo. Buff Bake are mostly known for their protein-infused spreads, which I had one time and was underwhelmed by, and their Lenny & Larry’s-esque soft baked cookies, which, again, are just alright. However, their new line of Protein Sandwich Cookies promise the creme-filled satisfaction of the grocery GOAT with an added boost of protein. Each package contains four cookies for 220 calories, 13 grams of fat, 16 grams of carbs, 12 grams of protein, and, gasp, 12 grams of sugar.

END_OF_DOCUMENT_TOKEN_TO_BE_REPLACED

My first name is Sean, and my last name is Skillet, but my middle name may as well be “SweetSalty” for how much I really love that combination. Opposing flavors that can compliment each other AND make one another greater is a thing of true beauty, and I’ll take sweet and salty in my breakfast, lunch, or dinner. Understanding this wonderful yin and yang of tastebuds, Trader Joe’s are helping me amp up my S&S at snack time too, with their new Sweet and Salty Granola Bars, which they describe as a nutty granola bar dipped in almond butter and Greek yogurt coating.

This bar is fairly straight forward but very well executed. The saltiness is just enough to warrant the “salty” part of the title, and isn’t overwhelming but comes through in small bursts of little salt crystals evenly distributed throughout bites. They aren’t big and crunchy like sea salt but stand out more than your average table salt mixed into a recipe for balance. The sweetness comes through in the Greek yogurt layer and is a different and refreshing spin, rather than raisins or some other form of squishy sugary burst.

The mixture of crisped rice, whole oats, wheat flakes, and whole almonds gives a great chewy texture with pockets of crunch and a slightly golden flavor that reminds me of graham crackers. The graham-y-ness is accentuated once again by the Greek yogurt with some tasty vanilla notes and a great soft sweet and salty profile without the aggressive use of chocolate or caramel or another decadent flavor you’ll often find in S&S. The almonds help liven up the bites and add small pockets of fattiness that keep all of the components in check and interesting from beginning to end.

The prominent finishing note on the bar is almond butter, and it’s a really nice way to seal the deal. The smooth creamy butter flavor enhances the presence of the actual almonds and has just the right amount of fatty flavor to keep it more interesting than your average granola bar. The ingredient list has not only almond but peanut and cashew butter, and while those butters aren’t super apparent there’s a depth to the richness that is great and much more complex than I was anticipating. Overall these little bars surprised me – sweet enough to go with a nice cup of coffee but not so sweet that they feel like candy. If sweet and salty is your thing, let these push your little impulse purchase button the next time you’re in line at TJ’s.

I’m a nut butter nut, and when it comes to creamy, fatty, crave able jars of spreadable protein I’m always down to try something new.  I’ve had many types of pulverized nuts in my days, including Trader Joes’ great Mixed Nut version, but never have I had or seen a pistachio butter…and the times, they are a changin’.  The Peanut Principle are a gourmet nut butter company from New York, making buttery goodness out of nearly every kind of nut from plain and flavored peanut to hazelnut, walnut, macadamia, pumpkin seed, and lots more.  I ordered a huge sampling of peanut butters last year and was overall very impressed, so when they announced pistachio I had to jump on the opportunity.  Going Green is a creamy pistachio butter that’s as basic as it gets, with the lone ingredient being organic dry roasted pistachios – no salt, no sugar, no BS. 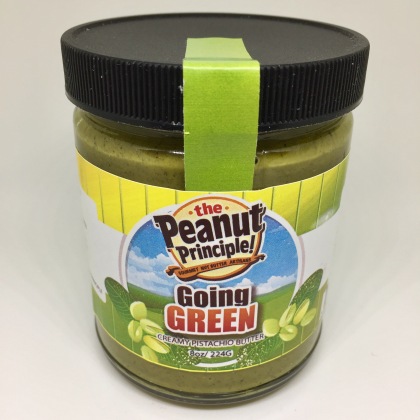 The taste of this butter is everything the look of the jar promised – pure, rich, thick, intense pistachio.  It’s a very unique-to-the-green-nut-flavor that is deep and roasty, slightly sweet, and cleanly fatty.  The texture is insanely thick but less lip-smackingly mouth-drying than peanut butter tends to be, which I think might be due to the lack of salt.  Despite the absence of saltiness there’s no lack of pop, as the nuts themselves pack a big wallop of flavor that needs little help to be incredibly robust and huge.

On toast the flavor becomes a bit more subdued and blends in with the bread well.  Some of the richness mellows but the sweet flavor of the pistachio stays intact.  As good as that flavor is, I didn’t think the butter offered as much as a traditional peanut butter or salted butter so I tried it with cinnamon and sugar, which still was just okay, and then strawberries, which also were just alright.  I could see this being tasty spread on some pancakes, dolloped onto some vanilla ice cream, or used in conjunction with some pistachio pieces to make a killer stuffed french toast.

Make no mistake, this is a premium product, and at $11.99 for an eight ounce jar it’s four times the cost of a regular peanut butter, even from a gourmet company like Peanut Principle, whose sixteen ounce jar of regular PB goes for $5.99.  It may be expensive, but it absolutely delivers on what it set out to do, and packs the punch of what feels like hundreds of pistachio’s into a small glass jar.  Pistachio’s aren’t one of my favorite nuts, but if you’re a fiend for the little green guys, this stuff will send your morning bread into hyperdrive, or be a perfect pick-me-up straight from the jar, without the hassle of shells.

Who doesn’t love a good handful of mixed nuts?  Each reach inside of the jar or bowl is much like our buddy Gump would say and you “never know what you’re gonna get”.  Whether salty or sweet or straight up plain, mixed nuts earn praise from health freaks, beer guzzling bar goers, and those who just like a good crunch for their afternoon snack.  So why hasn’t anyone pulverized them all and shoved the mixture into a jar?  Welcome Trader Joe’s to the equation.  In addition to their already packed line of butters – from the heralded cookie to the classic peanut, TJ’s is now slangin’ Mixed Nut Butter, which combines dry roasted and salted almonds, cashews, walnuts, brazil nuts, hazelnuts, and pecans into a gooey runny treat to spread up your life.

The butter has an extremely smooth and creamy consistency.  Right after mixing and out of the jar it is thin, runny, and oily in a way that is tempting to want to drizzle it all over any and everything.  The texture is very unique – much similar in appearance and initial feeling to almond butter except not nearly as thick or grainy.  The primary flavors that come through are almond and cashew with some hints of pecans and brazil nuts.  I don’t specifically taste the hazelnuts, but I’m okay with that because they’re generally my least favorite and most astringent tasting in any mixed nut variety, and I can’t pinpoint the flavor of walnuts either.  The salt level is perfect – not so much that the butter tastes salty, but just enough that the spread pops and shines on its own to highlight the complexity of all the different components.

After leaving the mixed butter in the fridge for a couple days I was surprised that it didn’t seize up and become firmer the way almost all other nut butters do.  It was slightly more together than when I first opened it but it stayed thin and runny enough that it could still be poured onto food (or into your mouth) straight from the jar.  After cooling I also noticed the pecan notes to be more pronounced, which isn’t a bad thing at all since they provide a great golden richness that amps up the overall flavor on this unique product.

For the final test: the butter goes good on top of toast, but it doesn’t achieve the same ultimate magical combo with banana that peanut butter does.  I’ve always preferred peanut butter to all other types of nut butter, and while this mixed one is fun and well done, it doesn’t change my mind on which nut makes the champion butter.  It’s fun and tasty, but factoring in flavor, cost, and macros, I think I’ll stick with my one true nut butter love – the peanut.