Earlier this year Quest announced that it would be rolling out three new flavors of cheat clean goodness over the course of four months and the big bad finale is finally upon us. Following the success of imitating a cookie with Oatmeal Chocolate Chip, and a muffin, with Blueberry Muffin, the Quest brand has chosen to take on imitating Rocky Road ice cream.  The classic flavors of chocolate, nuts, and sweet marshmallow lend themselves well to a portable protein bar, but how does it stack up against the others in the Quest-verse?

Rocky Road’s biggest strength is the same as the two that came before it, and that is in its chunky prominence.  Quest have quickly solidified themselves as the king of the chunk and while new competitors pop up seemingly every month, Quest has found a way to keep itself relevant and desirable in the vast field of protein bars.  Every bite of Rocky Road has ample pieces of crunchy almonds and sweet marshmallow; the bar has some of the most equal chunk distribution I’ve seen from Quest and that keeps the bar interesting from start to finish. The chocolate base, like most Quest bars, has a strong sucralose flavor that drives the sweetness of each bite. As long as you’re okay with the fake sweet taste the overall experience is pretty true to a good scoop of rocky road ice cream. Almond is the dominant flavor over marshmallow, which gets lost just a bit in the general sweetness of the bar as a whole, but you see them and their presence is at least felt texturally. 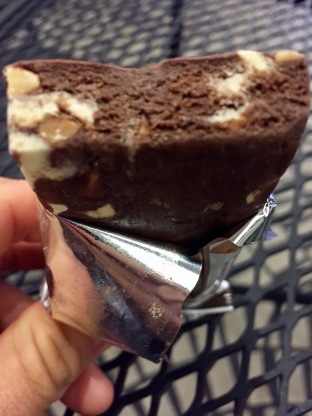 Rocky Road is essentially a nutty crunchy version of one of their best bars already on the market – Double Chocolate Chunk. While there are no pieces of dark chocolate lurking in the protein base, the ample amounts of almonds and marshmallows make this an intriguing bite on the go. Not as good as the two that came before it but still better than or equal to the other top Quest bars already available.