New year, new bars – let the fun begin.  Making my weekly trip to GNC I saw a big display of shiny red bars with an under market price and some interesting flavors.  For only $1.99 and the different angle of “protein crisp” as opposed to the usual dense style bar, I was intrigued.  BSN’s Syntha-6 line utilize both whey and soy protein as well as dried egg whites and rice crisps to compose their 20 gram Vanilla Marshmallow flavored protein injection. 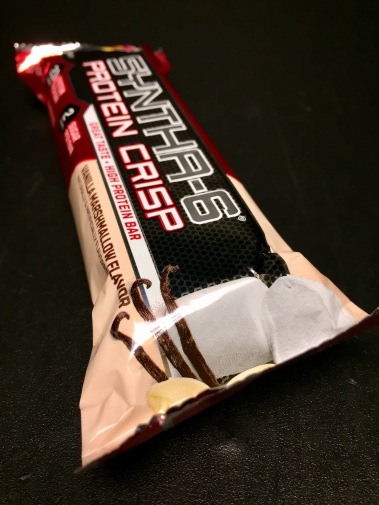 The first thing I notice is the very soft, moist, and crumbly texture of the bar. Unlike the NuGo bars, which are one of the other ones I’ve had in this Rice Krispies Treats style, there is nothing hard or dense about this bar, and the protein pieces are so loosely packed that they fall apart.  The crisp pieces are pushed together with a gooey marshmallow-y sticky base with a white drizzle on the top and bottom of the bar.  The bite is very soft and pleasant with a good crunch that leads to effortless chewing, which can sometimes be impossible with tough taffy-like protein bars. 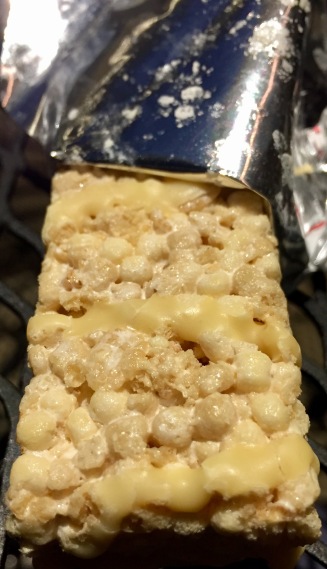 The flavor is vanilla-forward without being too sweet and some surprising subtle cinnamon undertones. There are no specific spices listed in the ingredients but I taste not only cinnamon but a hint of nutmeg as well. It isn’t aggressive but it compliments the vanilla and gives some depth to a flavor that had potential to be too sugary.  Marshmallow is a very specific kind of flavor that is easier to understand texturally than it is in its taste composition and they more or less got that down with the Rice Krispies feel. 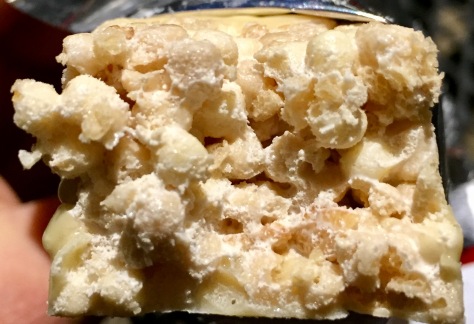 As far as emulating a marshmallow crispy treat it does a pretty good job texturally but is missing the rich butteriness you would expect when eating an actual treat. Although the packaged factory made ones by Kellogg’s don’t have a pronounced buttery flavor, my favorite part of a homemade marshmallow treat is the deep fatty butter playing off of the sweet ‘mallow. You don’t get that here, but it’s also a protein product and you can only expect so much.

Overall this is a really tasty bar with only two grams of sugar and zero artificial aftertaste.  The texture is a nice switch up from the usual offerings and is definitely one of the best vanilla flavored supplements I’ve tried.  I find it odd they chose to put in no fiber at all, since most bars will come with anywhere from 5-15 grams, but maybe that helped with the overall taste and texture that made it successful.