Even though Halloween is the universally loved and official holiday of candy consumption, any true sugar aficionado knows that Easter is a very close second. While you’ve gotta pay respects to the classics, the truth is that the days of stale jelly beans and yellow Peeps are long gone, and the limited candies of spring come in many shapes and sizes – but most notably, eggs. Some eggs are spring staples that only pop up once a year, and some are simply re-shaped versions of year ’round candy classics.

To truly up my husky boy knowledge I decided to embark on a 18 egg Egg-pocalypse pitting all of the commonly available candies against each other that can be found at Safeway, Target, Walgreens, and many other fine sugar-peddling stores in March and April.  When ranking the eggs I kept in mind overall flavor, execution, difference or similarity based non-seasonal versions of the candy, whether or not I felt the need to buy another one before summer comes, and of course, my personal taste bud bias. I also limited it to only full-sized eggs because mini is a whole different war for a different day.  Let the battle BEGIN!

Look, I didn’t want 2020’s new entry into the egg-pocalypse to be be the lowest ranking either, but here we are. Good news is it’s still chocolate so it’s still fun to eat, but when put into a field this dense with Easter goodies it’s hard not to fault Reese’s for this pretty lazy novelty. It’s a chocolate egg with Reese’s Pieces inside. That’s all. The best part about it is the texture – the chomp of the candies against the sweet and smooth milk chocolate is pleasant, but the peanut butter (the best part) gets lost. While it’s certainly good enough to eat once during the season it’s not one I would come back to, and isn’t anything you can’t make yourself by tossing two things in your mouth at once on the couch.

Thick frosting-esque chocolate filling inside of a milk chocolate shell. Very sweet and becomes fairly single noted after two bites. It’s not disgusting but definitely doesn’t make me want more. Would be better with a darker more bitter filling or some other type of contrast – very forgettable and easy to skip.

I used to like these a lot when I was younger but now I find them way too sweet. The creme has a strange not quite marshmallow and not quite caramel texture that is off-putting and tastes like eating an icing made with tons of powdered sugar and lacks any sort of balance.

There’s absolutely nothing wrong with this egg at all, in fact, it’s pretty awesome, it’s just a relatively straight forward chocolate experience – like the thickest most epic Crunch bar you’ve ever had. While I like Crunch bars quite a bit, I usually just enjoy them in mini size around Halloween and don’t ever seek out a full sized version – that’s kind of how I feel about this egg. Executed really well – sweet and crunchy, but not something I feel the need to buy again. 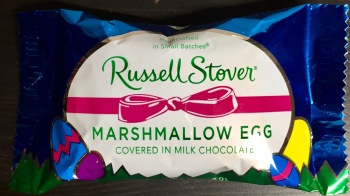 Thin but smooth milk chocolate with a very creamy, almost wet marshmallow center. It’s like a gooey cross between a creme and a marshmallow. Soft hints of vanilla and not too sweet, which wasn’t what I was expecting and was surprisingly good.

This is like a sweeter, cheaper, marshmallow-y Mounds bar with decent dark chocolate coating and slightly gritty but fluffy coconut insides. The filling is far from pure coconut but has enough flakes to give the proper flavor and is a pretty enjoyable candy. The texture on this one almost reminds me more of marshmallow than in the marshmallow egg.

This egg is in the exact same vein as the Crunch egg above but slightly better – there’s nothing wrong with it, it’s just very similar to the year-round available version. Almond Joy’s already have a bit of an egg shape so this was a very natural progression, just thicker and more intense. Imagine if you stacked both pieces of an Almond Joy on top of each other and removed one of the almonds – that’s pretty much what you get here. Delicious sweet coconut with creamy milk chocolate. It’s classic.

High quality smooth milk chocolate with a much more chocolate forward flavor than the Reese’s staple.  It’s lacking some of the peanut butter punch with the PB getting overpowered and almost becomes too rich without any salty relief. It’s a well made product but not super craveable or classic like its competition, although it’s still peanut butter and chocolate so hard to deny.

Good quality milk chocolate shell filled with thick gooey caramel that has a slight hint of butterscotch. Not salty at all but not as overwhelmingly sweet as the original  Cadbury Egg, and for a sweet Easter basket treat this is definitely my favorite that Cadbury offers.

It’s a Twix. It looks and eats like a slightly less tall more wide version of the original Twix bar. I’m not sure if it’s my recent experience with the giant Twix egg but the cookie seems a little less crunchy than what I expected. It’s a wonderful combination of chocolate, cookie, and caramel that is delicious but less so than the regular longer bar, where the added height gives a bit more textural excitement.

It’s a snickers. Very similar ratios to a standard bar but just slightly more caramel and slightly less nougat.  For most people I think Snickers is a top 5 candy bar during the regular part of the year so this doesn’t disappoint, but it doesn’t exceed expectations either.  I recall the Christmas Nutcracker having bigger peanuts and more drastically different ratios of caramel and nougat, which I was hoping for here but didn’t get. 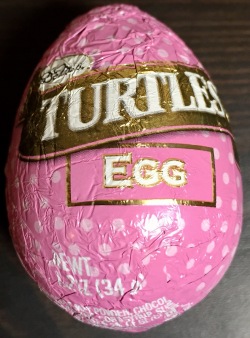 The chocolate shell is thinner than what you get with a Cadbury egg but what’s on the inside is twice as nice. This thing is packed with caramel and pecans so much so that you get both in every bite. The caramel is thick and not too runny, holding the pecans together, which tempers the overall sweetness for a well rounded turtle treat that’s so rich it almost becomes savory with a hint of pecan pie.  Delicious. 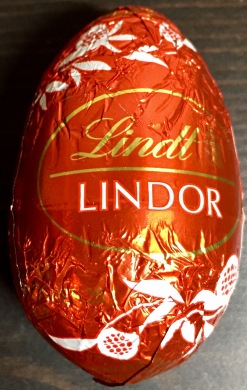 This is exactly as advertised, and basically, “wow”. It’s a bigger and stretched out version of the Lindor milk chocolate truffle, aka an incredibly smooth and velvety chocolate that is as rich as butter with a perfect amount of sweetness. Very decadent, very delicious, almost feels as though it’s in a different class of quality than all of the other eggs, but, that doesn’t mean it’s the best. 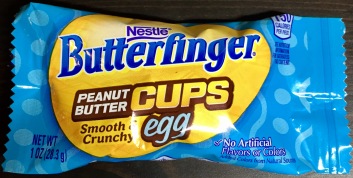 A crunchy peanut butter cup with salty golden Butterfinger flakes embedded within the butter that pairs really well the milk chocolate. I like their regular cups and I think this one may benefit in the same way that the Reese’s eggs do with a bit more height to give a stronger PB to chocolate ratio.  This egg was an absolute surprise to crack my top 5 but I could not deny its deliciousness.

Reese’s Peanut Butter Cups are my favorite candy ever, and they have, in my opinion, the perfect balance of sweet and salty PB to chocolate ratio. The only thing that trumps the original is the egg variety, which puts a greater emphasis on the salty peanut butter. The 3D version of a Reese’s egg also changes the ratio, but this time favors chocolate over PB. The thick outer shell of milk chocolate is delicious and creamy but asserts itself a bit strongly for the salty subtleties of the filling. The inside of the egg is also different than your usual Reese’s with a creamier but also gritter consistency than what the tried-and-true “flat” eggs offer. Wonderful egg, and still better than most, but can’t mess with my PB-lovin’ heart.

Less sweet than a Cadbury egg and more texturally intriguing, this is the 2017 answer to what I thought the Cadbury egg was when I was younger. The slight crunch of the cookies makes it much more interesting with a little bit of contrast and the creme does taste a lot like the inside of an Oreo. The outer milk chocolate is smooth and creamy and on par with Hershey’s, maybe just slightly below Cadbury, but the overall balance is much better.  I’m a big fan of last years Oreo candy bar and this is just like that except bursting with creme filling.

Just like the regular Reese’s egg this is exactly like the white cup but plumper with greater peanut butter to chocolate ratio. It works just as well, popping with sweet salty peanut flavor, but much like with the regular cups, it’s hard to dethrone the original no matter how good a variation can be.

It’s a big debate among Reese’s fanatics but the egg is often regarded as the GOAT of all Reese’s seasonal shapes among hearts and pumpkins and I am definitely in that camp. The PB to chocolate ratio is through the roof with more peanut butter than your typical Reese’s cups. While I have no problem with the original at all, these eggs explode with rich sweet peanut butter flavor that is always fresh and worth savoring every bite.  The classic milk chocolate Reese’s egg is a must have every spring and the true champion of my Easter basket heart.

Well, there you have it – my ranking of seventeen different chocolate eggs!  What do you think?  Did I completely mess it up or are my taste buds spot on?  Let me know in the comments what your favorite eggs are and any amazing ones I may have missed!