When your definition of magic is getting high as all hell on sugar from one bite of a confectionary treat – look no farther than magic bars. Commonly known as seven layer bars, these graham-based blondie-brownie-hybrid delights combine chocolate, butterscotch, and coconut for a bite that is sugary enough to send your blood sugar into a never-ending spiral of sweetness. For their take on the bar, Little G combined coconut ice cream with butterscotch chips, graham cracker crumbs, mini chocolate chips, and magic bar chunks. 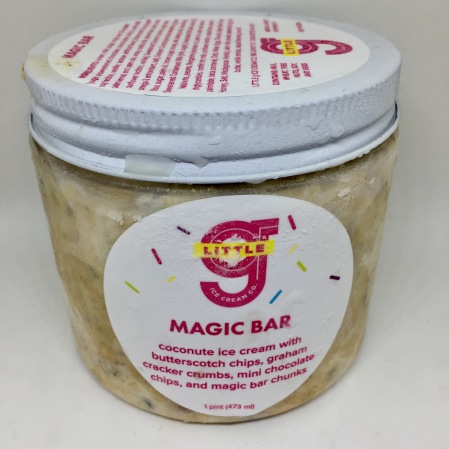 This ice cream is…weird. To be honest it’s hard to even call it ice cream with how much graham cracker crumble there is. Opening the pint there are some white glimmers that resemble ice cream, but the predominant color is tan and the predominant feeling is dry. The coconut base, when I can get a bit of it untouched, is good and creamy and identical in flavor to the sensational Caramel Cookie flavor from the spring line. Unfortunately, nearly every bite feels like its been rolled in graham crumbs and it reminds me coating a cookie in some kind of crumb or sugar before baking. It’s odd and off-putting. As the ice cream tempers more the coconut base doesn’t get any more shine, and instead the graham just feels like a soggy graham cracker that’s been dunked in milk – not disgusting, but not what I’m looking for in a premium pint. 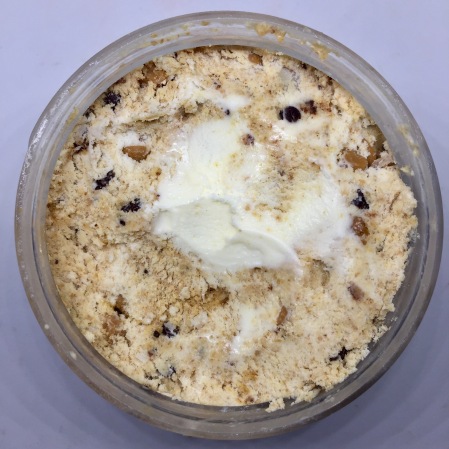 The oddities don’t end there. This is the first time in my life I’ve been staring at a spoonful of butterscotch chips and can’t taste any butterscotch at all – literally none. The chips are hard, cold, and literally flavorless, and for such an intensely dominant flavor like butterscotch I can’t wrap my head around why this is happening. To assure myself I’m not crazy, because I am crazy and have some Boo-too-scotch M&M’s on hand that were made a year ago, I try one of those to compare, and yup, tons of butterscotch – my buds aren’t broken. The chocolate chips are similarly rampant in the pint and have a bit more flavor, but still nothing too exciting, especially against the relatively bland and repetitive-ness of the graham-caked coconut base.

The only saving grace in this container are the magic bar chunks, which are unfortunately almost nonexistent, so their rescue mission falters rather quickly. The chunks, when they do show up, have a nice coconut-y chew with walnut crunch and extra punch of chocolate that, even in their very small doses are more effective than the chips. These bites were great, but there were only 3-4 pieces in the whole pint, and even those were much smaller than what I expect from Little G.

Magic Bar comes off as a poor mans very lackluster and ultimately upsetting version of Cowboy Cookie. While I see where the intentions are, trying to layer graham crackers on top of the ice cream instead of making a graham ice cream to achieve the flavor and texture of magic bars, it simply does not work and is not on the level I expect when ordering ice cream in the $15-20 range. The experience isn’t revolting, I ate the whole thing trying to figure out what I was tasting, but it isn’t enjoyable either, and from Little G I want greatness, not half baked mediocrity.