Within any collective community or “scene” there are always different levels of dedication. There are casual sports fans who might don a team’s hat when they’re doing well, and then the guy who shows up shirtless to every game painted in the team’s colors. There are listeners of metal music that may fancy themselves a nice studded bracelet, and then there are those true-to-the-core metalhead badasses who don’t own a single piece of non-black clothing. There are part-timers who punch in 23 hours at their workplace, and then those who crawl their way in on Sunday’s and never push less than 60. There are the Taco Bell’s who are dedicated to the insanity and the McDonald’s who never stray too far from the path. You get the picture.

In the junk food world the levels of dedication can be measured by limited time offerings, and while Oreo reigns supreme in coming out with kooky cookies (Swedish Fish, Cotton Candy), Keebler have yet to really take any risks since delving into the LTO-iverse last year…until now. While they’ve played it generally close to the vest with Pumpkin Spice, Lemon, and Cinnamon, this summer the Elves took their first step towards true dedication, trying a flavor that is no easy task and could ultimately lead to Fudge Stripe failure – Strawberry Cheesecake.

Ripping open the soft pink and off-white packaging reveals a distinctly tangy and cheesecake-y aroma. It’s mellow but sharp, and surprisingly less strawberry-forward than what I expected. These cookies were shipped to me straight from the Elfin land of Keebler’s Hollow Tree, and quite a few of them took a crumble tumble in travel, but that shouldn’t effect the taste at all. The intact cookies share in the same rosy pink as the package with the signature white “fudge” stripes on the top.

Wow – these cookies are awesome. Much like the initial smell, the flavor that I get smacked with immediately is cheesecake, and to be honest I wasn’t expecting these to taste like cheesecake at all. I was anticipating a wallop of too-sweet artificial strawberry flavor with a hint of nondescript creaminess, more akin to a strawberries and cream, but these are tangy and cheesy with a great balance of sweetness. I’m not a big fan of fake strawberry, and I don’t get much of that flavor here at all, it may even be closer to cherry, as it just has a slightly tart fruity essence beneath the layer of cheesecake.

The texture, like all Fudge Stripes, is a soft-yet-crumbly shortbread that brings a nice hit of butteriness beneath the cheesy berry flavors. Much like the Lemon Stripes, the flavors here are all around a bit muted, but with such notoriously bold tart and tangy potential I really appreciate the subtly they come across with. The ratios are spot on with the berry taking the backseat, because no one ever eats a slice of cheesecake drowning in sauce, it acts as the acidic highlight to the decadent cake, and that’s exactly what these cookies do. 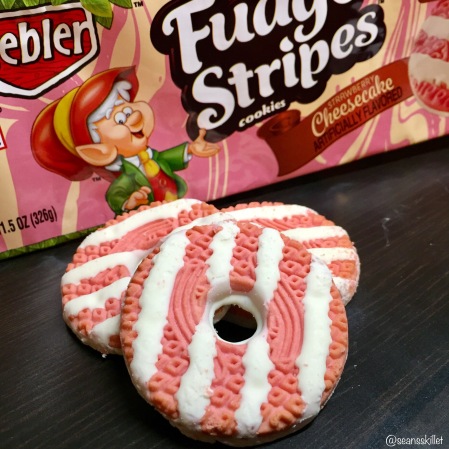 My favorite new product that everyone needs to try in 2022 are the Cake Truffles from @theecookieclub and @silvanafazz. I worked my way through their entire new lineup, and just like the introductory drop there wasn’t a single dud among the wide array of wintery flavors. Nothing has changed from the first experience in December of last year, each truffle packing two ounces of moist, sweet cake with contrasting textures and mix-ins all packed-in in meticulous fashion. While I enjoyed every single one, I wanted to highlight my two favorites:⁣
You know what time it is! New year new Oreo. I wrote all about the latest triple decker treat from Nabisco today on @theimpulsivebuy! ⁣
It looks like we’ve got a mystery on our hands…an ice cream mystery! I had a chance to try the mystifying new flavor from @turkeyhilldairy ahead of its release, and my complete breakdown is live today on @theimpulsivebuy! ⁣
This stunningly vibrant pint from @saltandstraw pays homage to the equally eye-catching Squid Game, but how does it taste? My thoughts were too vast to be contained on IG, so I have a full breakdown today on the skillet! Link in bio 😀 ⁣
I love intricate small desserts. It all began with discovering Petit Fours 20 years ago, followed by the cake pop trend, and of course my beloved See’s Candies that make a mandatory appearance every Christmas. There’s something about being able to deliver multiple flavors and textures in such a small package that I can’t get enough of, and the brand new Cake Truffles from @theecookieclub’s Thee Sugarriee are no exception.
After creating a cookie in honor of my favorite horror icon, Michael Myers, somehow, someway, Melissa, aka @lifesabaatch let me design an edible homage to my favorite Christmas character - Frosty the Snowman. My interpretation of the world’s most famous snowman is an almond flavored sugar cookie mixed with white chips, Almond Joy candy bars and Ritter Sport dark chocolate marzipan chunks, stuffed with an icy blue almond buttercream, topped with white chocolate and rolled in sweetened shredded coconut — garnished, of course, with a magical candy top hat.⁣
Loading Comments...
%d bloggers like this: