“You don’t know what you’ve got til it’s gone”.

A phrase that echoes through my mind every time I crush another jar of unassuming, innocent, beautiful peanut butter. That last, slightly too chunky, extra salty spoonful that lines the bottom of the glass or plastic is always so bittersweet, and if I’ve learned anything in life, it’s stock up on the things you can’t live without. Sometimes that means buying two jars of peanut butter at a time so you never run out, and sometimes it means seeking out products that only utilize the best flavors mother nature provides. Living up to this mantra, Dreyer’s are kicking off 2018 with a new ice cream that stacks goodness on top of goodness with a little extra goodness in Triple Peanut Butter, which combines peanut butter light ice cream with a peanut butter ribbon and mini chocolate peanut butter cups.

The peanut butter light ice cream is pretty damn good for what it is. The peanut butter flavor leans towards the sweet over the salty without being too sugary. It has an authentic nutty and creamy presence to it that does remind me of my favorite butter in the land, although it teeters than fine line between the real and powdered stuff. Where the base falters a bit is in the finish, which is a tad thin and watery, but there’s just enough fattiness there to keep me eating, and eating, and…eating. Yeah, it’s pretty hard to stop, I’m having jar-crushing flashbacks.

For what the base may lack in density and fatty flair, Dreyer’s more than makes up for with the great peanut butter ribbon. The swirl weaves in and out of the entire container, sometimes popping up in massive boulders that remind me of my favorite extracurricular activity – dipping a spoon into a jar of fresh smooth butter. The fattiness coats my tongue and brings life to the light base, along with some lovely salty pops that help differentiate the two elements of the same flavor. Oftentimes a swirl of caramel or fudge will act as a new flavor and textural component to an ice cream, but here it fully joins forces with the frozen slightly airy dairy to make a really good and convincing PB scoop. 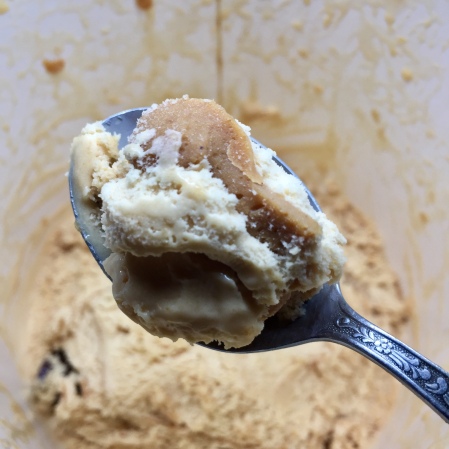 To my surprise, the peanut butter cups are also really solid. I’ve had many ice cream’s in the past where mini PB cups get lost in the mix, and here they actually bring not only a good toothy texture but some legitimate flavor intrigue as well. In addition to the satisfying chomp, the chocolate really shines against the double peanut action of the base and ribbon, bringing a very smooth and slightly bitter cocoa presence to complete the circle on one of the best flavor combos known to man. Although the amount of PB is pretty small on the inside of mini cups, the slightly gritty and salty nuances still poke through the ice cream and add more than if they were just chocolate chips.

Dreyer’s have once again managed to put out a great tasting container of ice cream that doesn’t break the caloric bank. Much like last years Slow Churned Peanut Butter Cookie Dough, the inclusion of a couple extra fatty mix-ins does well to offset the potentially flat light ice cream. And hey, when three of the first nine ingredients are peanut butter, it’s pretty hard to go wrong.