If there’s one thing that can be said about the great landscape of Easter candy it’s that regular jelly beans kind of suck. If there’s a secondary important layer of truth in the realm of bunny-approved junk food it’s that there are way too many flavors of Peeps. From traditional marshmallows in different seasonal shapes to the dipped Delights and more recent filled Delights, it seems like there’s damn near a different flavor for every day in spring.

Last year the Peeps-insanity went to new heights with the Peeps Oreo, and very much in line with their doing too much mentality, this year the Peeps Oreo are back, but you’d better believe they aren’t the same. The 2018 rendition sandwiches a purple marshmallow flavored Peeps crème in between two classic chocolate wafers. 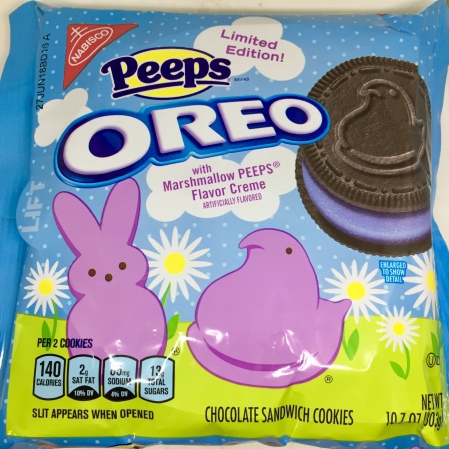 Unlike a lot of folks, I didn’t hate the fluorescent pink crème and Golden wafer version from last year, and in my review they ranked as an average limited release that are worth the $3 gamble but nothing you’ll regret missing out on. The use of the oftentimes astringent-tasting Red Dye 3 caused a bit of a funky flavor buildup after a couple cookies, but beyond that they pretty much tasted like a slightly gritty sweet buttercream Oreo not too different from the autumn seasonal Candy Corn.

The revisionist craftsman at Nabisco and Peeps did something really great with their second attempt – not only are the cookies garnished with a cute as hell chick or bunny, but they actually taste really good. The strongest element of 2017’s release is still fully intact – a wonderful sugary grit crunch within the crème that emulates the outer shiny cloak of the classic Peep. The crème is soft and creamy with a subtle marshmallow flavor that once again reminds me of buttercream frosting. While Red 3 is still listed in the ingredients, I don’t get any weird bitter pushback after eating a couple, and the actual color presented is so far removed from the wildly bright pink of last year that there was no doubt less red used in creating this hue. 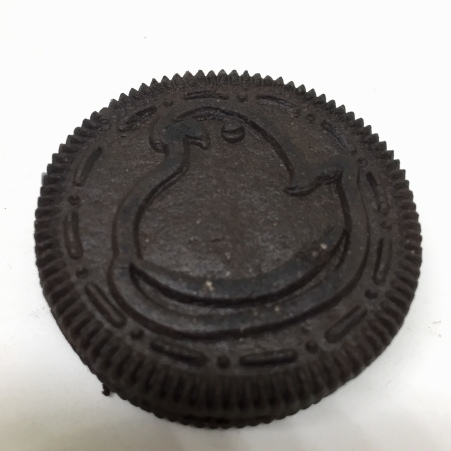 The substitution of a chocolate wafer is surprisingly awesome, and works some magic with the vanilla-leaning sweet crème to create the wonderful sensation of a chocolate cupcake. You know those cheap grocery store cupcakes that come in a dozen with half vanilla and half chocolate with funny little multi-colored frosting swirls on top? That’s exactly what this reminds me of, and it’s delicious. The sugar crystals on the inside channel the crunchy sprinkles on top of the buttercream swirl for a flavor I can’t get sick of.

At its core the 2018 Peeps Oreo is essentially an extra smooth and sweet version of the original Oreo, but the subtle changes and contrast between the wafer and crème combine for more success than I ever anticipated. Whether you’re a weirdo who adores Peeps or just someone seeking a good cheap cookie, these are a great release to start your snacking into the spring season.