Dunking a graham cracker into a tall cold glass of milk is one of the quintessential nostalgic past times of childhood. Maybe it’s because they aren’t chocolate or filled with crème, but for whatever reason I was allowed to eat graham crackers way more often than normal cookies as a child, and for me they are the ultimate companion to milk. I could do without milk and cookies in every other application, I’ll take some black coffee instead, but milk belongs with graham like Curry belongs on the Warriors, and the two compliment each other in soft subtle ways like no other. The top dawg brand of them all, of course, is Honey Maid, and in its glorious shadow all other crackers taste like mere imitators. It’s time for all other cereal’s to feel like imitators too, because the big boy has come to play with Honey Maid S’mores Cereal.

This cereal is an instant recipe for success, combining three already established bowl-ready flavors into one. The Golden Graham-esque squares, Cocoa Pebbles-esque chocolate balls, and the oh-so-iconic freeze dried marshmallows.

The graham squares are absolutely sensational. I never thought that a cereal piece could taste identical to the crackers in the blue and yellow box, but they absolutely do and they shine with golden splendor. They’re thin and crunchy with an amazing honey flavor that tastes spot on like a shrunken down extra crispy version of the Honey Maid classic. While they’re definitely sweet, the most impressive and defining element of the squares is a distinct saltiness that cuts through the light sugary dust covering everything. It’s delicious, craveable, and perfect straight out of the box and into my mouth. 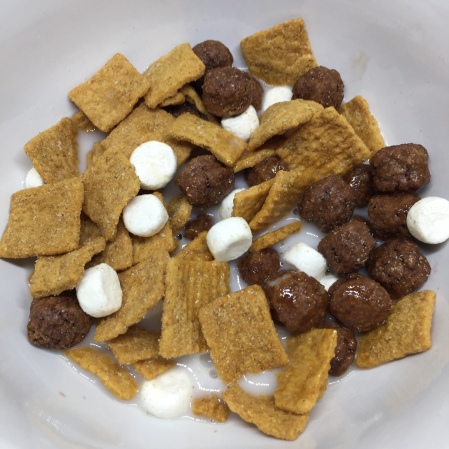 The mini marshmallows are exactly what you would expect, but in the upper echelon of cereal ‘mallows. They have a gentle squish inside of their firm exterior and are sweet with a slight vanilla flavor. The chocolate balls are good but are the weakest element of the mix without too strong of a cocoa flavor. They’re missing some of that bitter depth that a cereal like Cocoa Puffs provides, but in the grand scheme of things they do their job and support the golden greatness of Honey Maid.

The only thing holding this cereal back from being an absolute milky slam dunk is the performance of the graham pieces in milk. While the flavor is still good the pieces get soggy very quickly and lose their definitive crunch and salty shine. The marshmallows do great and the chocolate balls stay their average self, but the sheer greatness of the squares is taken down by the addition of moisture. It’s still a wonderful bowl of cereal, just make sure to be light handed when going for that pour; or simply smash it by the handful straight from the box with some milk on the side.