You would never know by lurking this site, but I actually really like Enlightened ice cream. I’ve been a fan of theirs for nearly two years but never wrote about them because I had this grand scheme of ranking all of their flavors and being a super completest about it. Problem is, their distribution in the bay area has been pretty spotty, and only a handful of flavors are available, especially since it seems like they’ve released about 43 varieties in the last year. All that hooplah aside, I would be pretty short sited to overlook one of the biggest trends in the frozen grocery game during National Ice Cream Month, so it’s time to finally break my silence. In March Enlightened made their strongest push yet, rolling out five new pints backed with a strong PR presence and inventive flavors that set the internet off with hype. While I still haven’t been able to track all of them down, and the ones I did get I had to leave San Francisco for, I’m stoked to introduce the skillet to three new high protein low fat low sugar alternatives to get your creamy fix. Movie Night, French Toast, and S’mores.

Popcorn ice cream with chocolate bits and a caramel swirl. 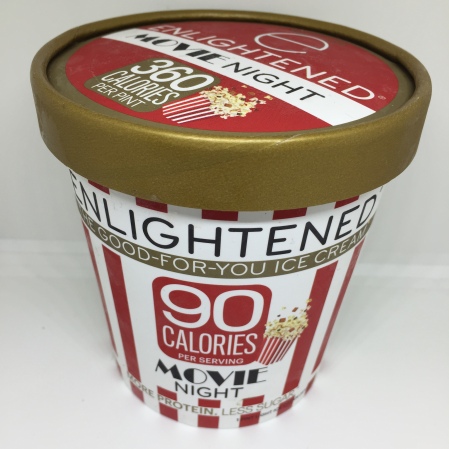 This is an incredibly bold flavor, not just for a protein ice cream company but for any brand selling in the grocery store. Based on my own preferences this is the flavor I was the most excited for and it’s good but not great. The base has a slightly corny buttery flavor to it that definitely isn’t vanilla or bland, but not quite as salty as I would hope to really bring the full popcorn profile. Where I want a salty pop I get an artificial sweetener finish, which is par the course for stuff like this, but it’s more dominant than I’d like. As with most Enlightened pints it has a very smooth and velvety texture that sets it apart from any of the competition.

While Enlightened has my favorite protein-cream texture in the game they tend to really bring it when it comes to the mix-ins and this flavor is mid-level for them in terms of density. There are tons of chocolate chips that have a great cocoa crunch and sweet smoothness to go along with the great caramel swirl. The swirl isn’t as thick or prominent as it is in my favorite Sea Salt Caramel and I wish there was more to really bring the experience full circle, but I understand their need to balance the macros with the two components as opposed to just one. 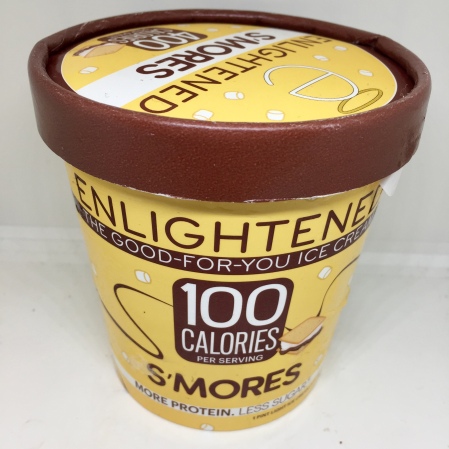 Putting a frozen spin on this melty summer treat is no easy task, and I’ve talked about it many times when reviewing other pints, but Enlightened absolutely killed it with the execution of this flavor. The toasted marshmallow base is nice and sweet with roasty undertones and the usual very satisfying rich-for-light-ice-cream texture. It does a better job of channeling legit marshmallow flavor than some companies do with way more fat and sugar, and I legitimately enjoy eating this one from top to bottom. 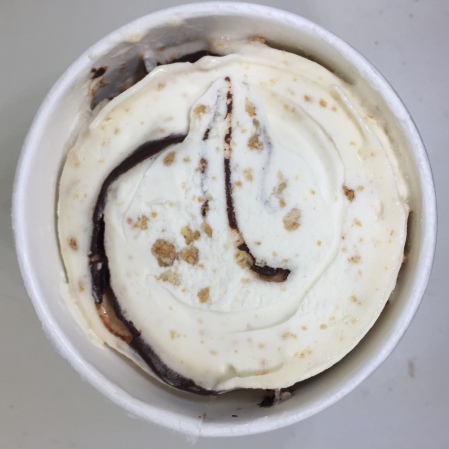 The good news doesn’t stop with the base, and where Enlightened usually cranks it up they deliver big time on the mix-in department as well. The graham cracker crumble favors a sweet honey flavor over a more buttery execution, and while I usually dig the butter vibes, this graham really takes me back to my cracker dunking days. The chocolate swirl is ample throughout the container with a slightly thicker than syrup consistency and classic Hershey’s flavor. Simply put, it’s great, and smokes Halo Top’s version which is pretty decent in its own right. 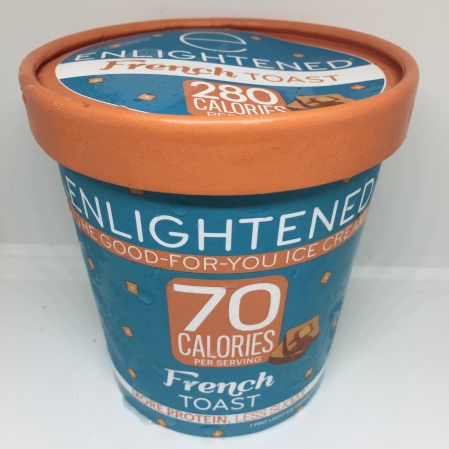 This is the other flavor I was fired up for with Enlightened’s most recent launch, and unfortunately it didn’t really bring the experience I was anticipating. The base has a nice spice mix that reminds me of egg nog with notes of cinnamon and nutmeg but finishes with a very strong artificial sweetener presence that pulls me out of the scoop. The texture, as usual, is great, and does a good job mirroring the custard the bread gets dunked in to make french toast.

The other issue with French Toast is the swirl, which doesn’t give me nearly as much maple flavor as I want, and again, finishes with a harsh artificial tang that doesn’t make me want to eat more. Some amount of sucralose presence should be expected with products like this but when it’s overbearing it kind of kills the concept. Still edible, but far from top notch for this generally solid company.

Mtn Dew VooDew Mystery Dew 2022 Zero Sugar taste test! ⁣
Krispy Kreme came out of the gates HARD with fall-inspired doughnuts before anyone else, and its third drop of the season features three brand new autumn goodies running until October 9. ⁣
Are new @ruffles Ridge Twists as fire as the first non-twisty basketball inspired chips?! Let me know if you’ve tried them!! 🔥 ⁣
One of my all time FAVORITE @butchershopbakecompany cookies is back after TWO YEAERS of pleading for its return! You’ve got 3 days left to get it along with my PB Banana Madnees collab! Code ses10 saves ya 10%! ⁣
It’s the last week for the @saltandstraw Harvest Festival Series! Check out my review of one of their newest wild cheesy cinnamon-y pints!! ⁣
Honestly, the only thing scary about this cookie is that this is the last week to order it! BOO THANG from BSBC is a brown sugar pumpkin base with caramel, white chocolate, donuts, and Java Oreo, stuffed with salted caramel macchiato buttercream, and topped with a white chocolate drizzle.
Loading Comments...
%d bloggers like this: