Baskin Robbins have been really slackin’ off lately. I made it my mission when I started the skillet to review every Flavor of the Month and be the ultimate go-to for anyone curious about BR’s creations. You may have noticed the last two months have been silent on this site for the 31 flavored brand, and that’s not because of personal fatigue, but because of BR’s rare back to back months of repeats. May brought back the solid Mom’s Makin’ Cookies and last month saw a second dip of Caramel Macchiato. I was sure that for July, National Ice Cream Month, and a month that has become synonymous with epic Oreo collabs, would yield a new scoop for me to dig into. Nope. It’s back to back to back repeats, but there is a caveat with this month’s call back.

July 2018 see’s the return of Oreo ‘N Cake, a flavor that proceeded the birth of the skillet and one that I really enjoyed when it came out in 2015. In fact, I liked it so much that during that hot July three years ago I scooped it three times, and according to BR’s website, this is their most popular Flavor of the Month of all time. Oreo ‘N Cake combines a cake flavored ice cream with Oreo cookie pieces and a chocolate cake batter ribbon.

Well, memory can be a hazy thing, because this flavor is good, but it isn’t great. The cake flavored ice cream has a definite batter vibe to it, with an eggy sweetness that stands out as a nice yellow cake kind of flavor that’s distinct but not nearly as delectable as the magic found at Cold Stone year round. 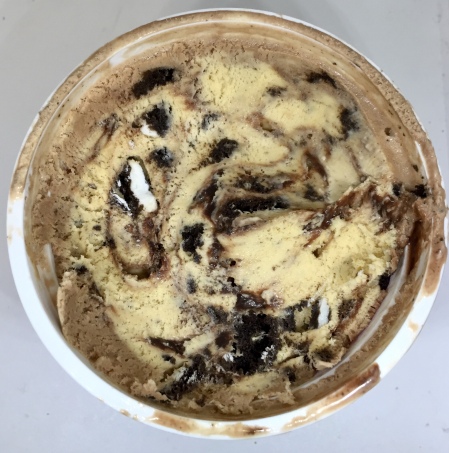 The cake-y base gets backed up strongly by the cake batter ribbon, which is chocolaty but sweet with a touch of syrupy grit that gives it some licking-the-spoon charm. It’s been three years but I remember the ribbon being a bit thicker and intense, and while it does its job I can’t help but want more, especially considering what I know they can do with my favorite America’s Birthday Cake. 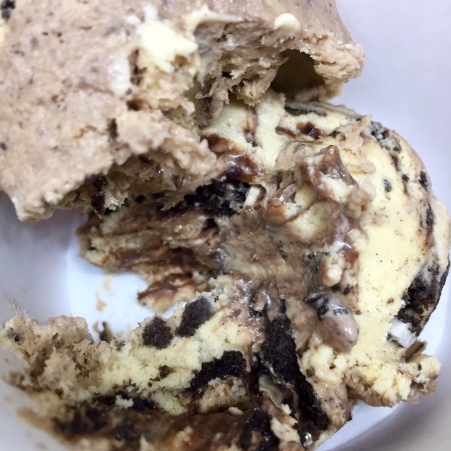 As has become custom with BR’s Oreo collaborations the cookie pieces are great. Good sized chunks with crème filling intact and a soft delectable chew that mimics dunked in milk perfection. I’m surprised that they’re my favorite element, since the ribbon is on the thinner side I’m getting much more satisfaction from the variably sized cookie chunks.

Even though I scooped it three times back in 2015, Oreo ‘N Cake was never my favorite Nabisco-laden cone topper Baskin Robbins created. I preferred Oreo ‘N Birthday Cake and Oreo Malt Madness, and this one just pales in comparison to my memory of those short lived classics. This flavor is also hurt a bit by March’s new and surprisingly impressive Oreo ‘N Caramel, which offered more contrast and interesting bites despite being more simple. It’s still a good flavor, but in the massive scope of Oreo creations Baskin Robbins have given birth to it’s far from their best limited monthly offering.