In the United States we have doughnuts, and in Spain they have churros. The long fried sticks of dough covered in cinnamon and sugar are a delicious treat often served for breakfast with hot chocolate, coffee, and dulce de leche. The marriage of sparkly sweet dough and chocolate or caramel is a match made in heaven, and while I prefer mine with a nice black coffee, the choco-churro combo cannot be denied. Continuing their fascination with breakfasts’ sweet treats, JC’s Scoops have unleashed Cinnamon Chocolate Churro, which combines sweet brown sugar and cinnamon ice cream with ribbons of chocolate fudge and pieces of sugar-dusted churros. 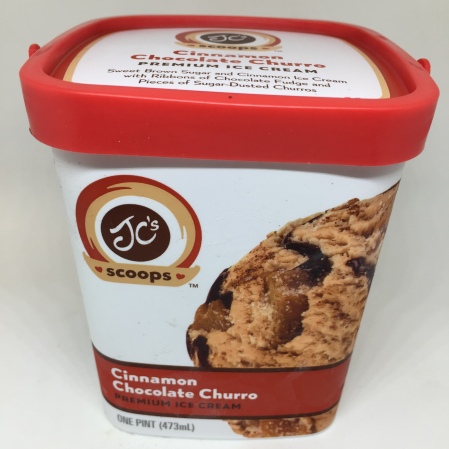 END_OF_DOCUMENT_TOKEN_TO_BE_REPLACED

In the history of the breakfast cereal universe there may be nothing more boring than Shredded Wheat. Okay…there’s Grape-Nuts, but I actually find something endearing and delicious about those little fiber-packed granules all soaked and sloshy in milk. But in all seriousness, Shredded Wheat is real damn drab. The mini variety with a coating of “frosting” over the top are a definite improvement, but would anyone really take those over Lucky Charms, Honey Bunches of Oats, Fruity Pebbles, or even good ole’ Cheerios? Most likely not, but General Mills, as clever and crafty as ever, are turning to the age old solution of curing boredom at any given time or event – getting absolutely blasted. That’s right, just like your introverted uncle at the quinceañera, welcome to the party Cinnamon Toast Crunch Blasted Shreds. 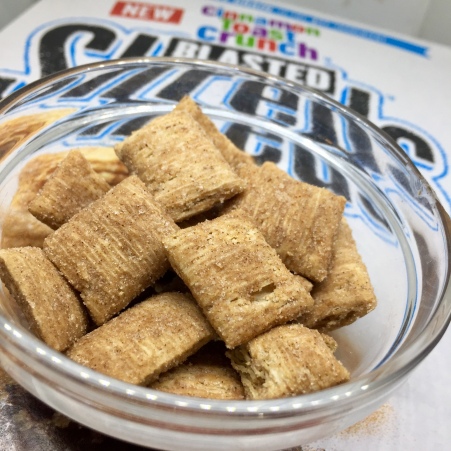 END_OF_DOCUMENT_TOKEN_TO_BE_REPLACED

Tea time is a special time. Whether doing it up super proper with finger sandwiches and scones garnished with Devonshire cream, or just making a cup at home and cozying up with a good book, the relaxing nature of warmth and caffeine brings joy to my soul. Pair that up with a delicious sweet treat and you have yourself an ultimate recipe for success. The same can be said for a mellow date to the ice cream shop, full of brimming scoops and smiles; few activities top my list of good times like those defined by waffle cones. Once again tugging at my heart strings to combine the best of both worlds into one experience, JC’s Scoops gave the world Tea & Biscuits, which is sweet milk tea ice cream with ribbons of cookie butter and pieces of tea biscuits.

END_OF_DOCUMENT_TOKEN_TO_BE_REPLACED

Pumpkin pie ain’t so poppable, and this year Mars want to change the way we embrace autumn’s most iconic circular treat. Although there are an unbelievable amount of pumpkin spice labeled products, not too many try to actually conquer the true application of said spice mix via the pie, which is a generally softer, creamier, and squash-y-er experience than pure spice overload. As a counterpart to the shriek-inducing double chocolate whammy of Cookies & Screeem, White Pumpkin Pie M&M’s are here to cool us down for short, relaxed, fall evenings. 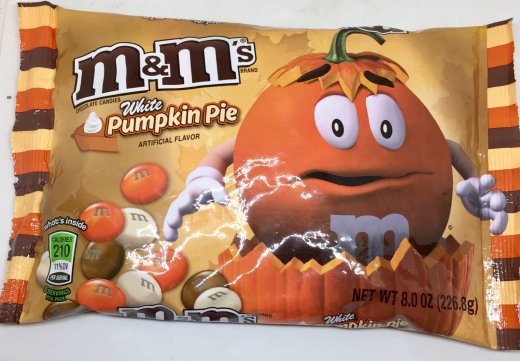 The candies present themselves as a lovely autumn array of muted tan, orange, and brown, with the usual bloated circular shape of the flavor-infused limited M&M’s. The typical great crunchy shell begins the bite, followed by a very well balanced and sweater-weather-worthy taste of pumpkin pie. 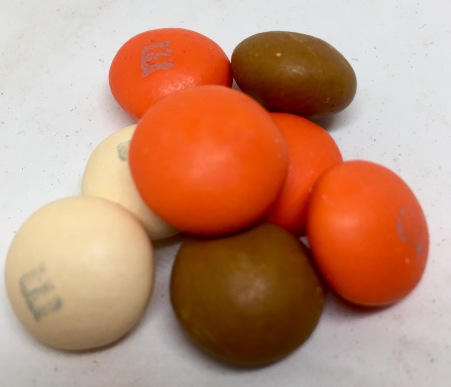 The flavor is mellow but very genuine and enjoyable. The leading note is sweet, with the bulk of the candy being white chocolate, followed by some cool subtle cinnamon and nutmeg. They’re creamy and lush with the mixture of spices offsetting the typically hyper-sugary profile of white chocolate. Unlike “real” or bitter chocolate, the spices don’t go to war with the silky white cocoa butter, and all the flavors coexist harmoniously. Being the spice-lover that I am, I would have no problem with a little more tingle, but I also don’t eat pumpkin pie anticipating my tongue to burn, so I’m not let down by these at all. 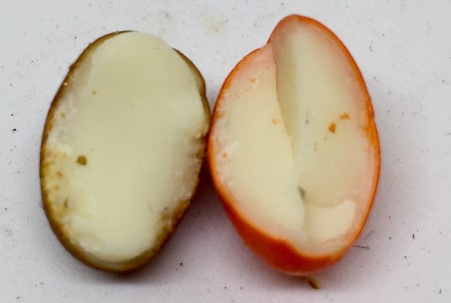 I’m the type of person who loves a good dollop of whipped cream on top of my end-of-Thanksgiving slice, and these M&M’s channel that sensation wonderfully. They taste like a big heaping forkful of mellow creamy pumpkin adorned with an ample amount of whip, and are perfectly snackable as well as true to their desired flavor destiny. Perhaps not the most poppin’ poppable candies you’ll ever have, but definitely one worthy of the crystal candy bowl in the middle of Grandma’s holiday dinner spread. 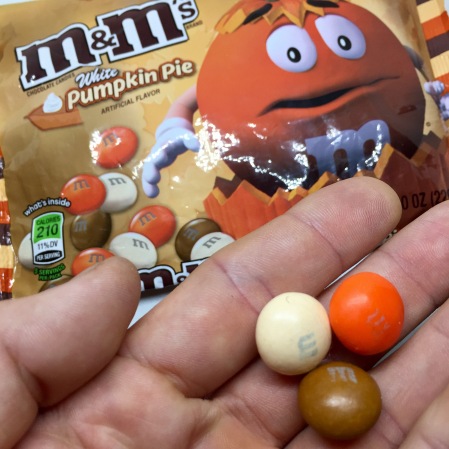 My life at the moment feels like a constant joyous swirl of pumpkin spice, which makes my repeat purchase of Pumpkin Spice Life all that much more fitting. I ate Life from time to time growing up, but it didn’t have the big sugary appeal of Reese’s Puffs or Cookie Crisp, so I haven’t revisited it much as an adult. Last year when this cereal dropped I made my return to the Life brand, and much like the PS Cheerios, when I saw them this season I felt the need to try them again, and gotta bring my thoughts to the skillet.

This cereal isn’t nearly as spicy as its direct Cheerios competition, but I’ll be damned if it isn’t just as tasty. The little criss-crossed squares don’t jump with cloves and nutmeg, but they do have a sharp cinnamon presence and wonderful creamy, almost buttery essence that makes them really enjoyable to eat. Dry they have lots of crunch and embrace the brighter, sweeter side of cinnamon, even though a serving only clocks in at 6 grams of sugar. When milk is added the creaminess gets kicked up a notch and the cinnamon flavor doesn’t fade – it simply stays a cool, mellow, calming spicy presence that is downright pleasant to eat. 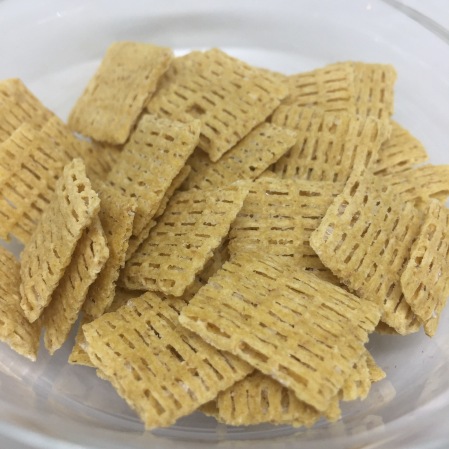 The flavor, while it isn’t very intense, reminds me a bit of pie crust that has just a touch of pumpkin pie filling on it. While I haven’t had Cinnamon Life in quite awhile, I imagine this is very similar, yet the bowl screams autumn, and I don’t recall getting those vibes from the purely cinnamon version. There’s an upper register pop to this cereal that’s unique, almost like a spicy spark going off on my tongue, and it happens with every bite. 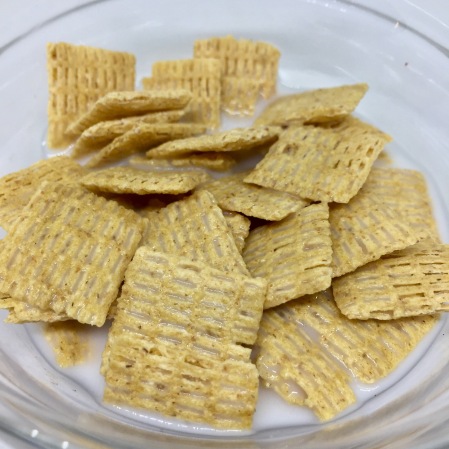 I’ll be honest, there isn’t a ton of bold pumpkin flavor in Pumpkin Spice Life, but there’s a perfect balance of toothy, spicy, earthy, and delicious that makes it incredibly palatable and hard to stop eating. It isn’t aggressive but it’s refined, and sometimes subtly can be a real treat. 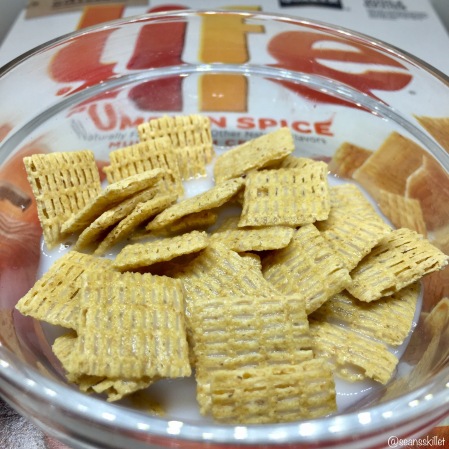 When I wrote about my love for Cheetos Sweetos last month a reader of the blog from Kansas City reached out to me and told me to slow down and back up because I didn’t know a damn thing until I had Clancy’s Cinnamon Churros.  Okay…she didn’t really say it like that, but she said they were better, and a seasonal release from local grocery chain Aldi, and that if I really loved cinnamon sugar treats I needed to try them.  Out of the kindness of her heart she waited for them to pop back up on shelves and sent a bag all the way to the bay area so I could try the heralded regional brand, so today, I try and put to the test, Clancy’s Cinnamon Churros. 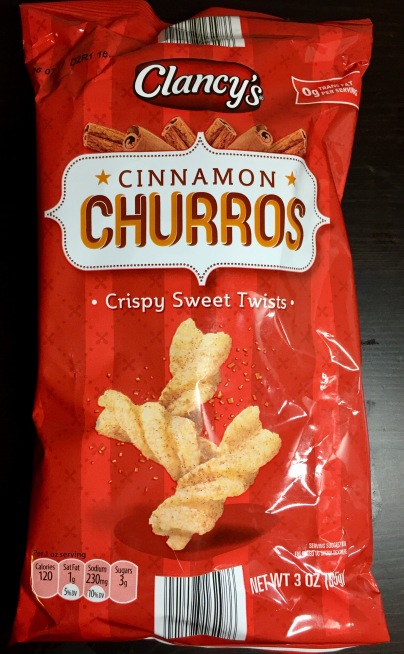 Out of the bag these Cinnamon Churros look almost identical to the warm twisty braided bundles of yum from Taco Bell.  They have a huge, sharp, and defined cinnamon smell that more closely resembles sniffing a bottle of ground cinnamon than a bag of chips.  Biting in the crunch is serious.  They’re hard yet airy with a delightful flavor that, much like the smell, is more cinnamon-forward than sweet or salty.  The crunch is addictively fun, and the spice-level is spot on for someone like me that loves cinnamon. 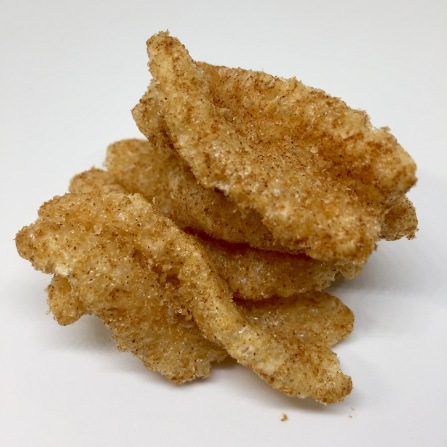 Unlike Sweetos, there’s no underlining butteriness and not a single sign of greasiness either.  The churros themselves are dry, but not in a bad way, more in a way that registers they were perfectly fried and dried so you get all the well-executed crunch factor without any leftover oil or undesirable texture.

The only thing I don’t like about these Churros is the fake sugar aftertaste when I finish a mouthful of cinny-delight.  I didn’t notice it immediately, but after a second handful I had a distinct Splenda zing on my tongue that was surprising and took away from the great spicy flavor.  Looking at the ingredients I wasn’t surprised at all to see sucralose listed right after cinnamon, and I find the use of the sweetener kind of puzzling.  While it does keep the sugar content low, at 3 grams per serving, these aren’t marketed as a diet food so why sacrifice the taste to shed a couple grams of sugar?  I eat plenty of products with sucralose in them, mostly protein bars and yogurt, but if I’m having a sweet and salty cinnamon snack I would prefer they just stick to their real sugar guns and give me the full cal goods. 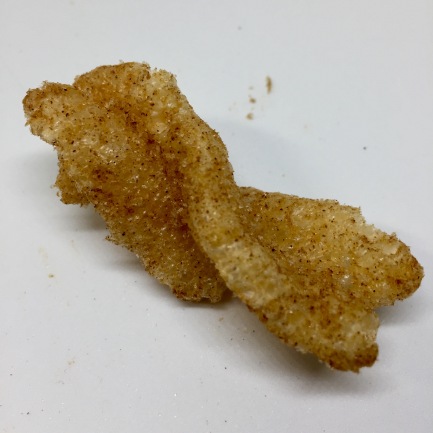 As far as cinnamon-factor goes, these ARE better than Cheetos Sweetos, but I’ve gotta be honest, they’re pretty different.  While these pack a huge crunch and authentic spice flavor, the Cheetos bring a softer butterier flavor that I enjoy just as much.  The saddest part in all of this for cinna-sluts like myself is that BOTH of these products are seasonal and will always be hard to come across.

There’s nothing quite like a powdered mini donut.  Packaged in a roll of six from a dark vending machine or lonely gas station, the tube of sugary delight never fails to deliver a messy Scarface-like experience of pure sweetness.  The only problem with these types of donuts is that despite their fun fluffy texture they’re relatively one dimensional when it comes to flavor – straight sugar.  Just in time for the holidays Tastykake have solved this issue with Gingerbread Mini Donuts. 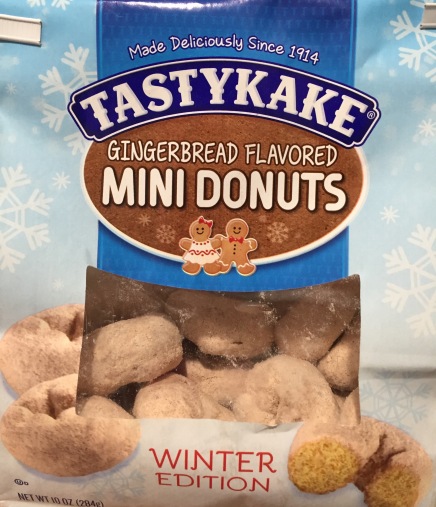 Unlike their lighter-colored year round sibling, the gingerbread version of Tastykake’s donuts deliver a wallop of spicy layers to back up their already perfect bouncy texture.  Rather than being covered in a dusting of powdered sugar, these donuts are taken up a notch with a robust shaking of ginger and cinnamon that erupts from the bag and translates just as convincingly to the tongue.  You don’t have to search for any traces of gingerbread as you can see the specks of brown all over the donut and the flavors completely smack you in the face to finish with spice-dominance that makes me think they used cloves in the mix as well.  The ginger here isn’t the raw ginger that tingles in your nose, but more of a ground ginger blended with cinnamon that meshes perfectly with the powdered sugar to create the ideal seasonal spice. 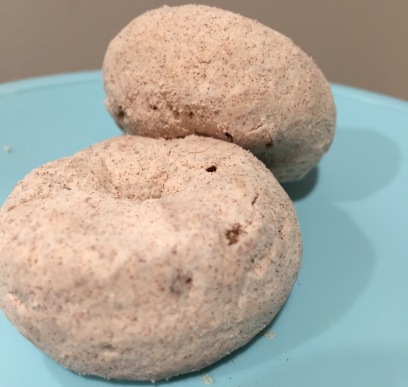 Additionally, the clever snack-ologists at Tastykake have put some kind of spice into the donut dough as well, as you can see little brown dots mixed in with a darker-than-usual cake that hints more towards tan than yellow. 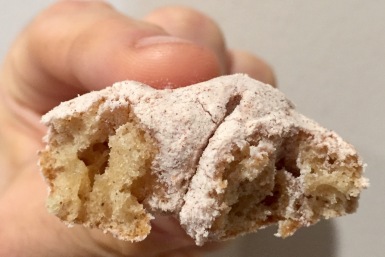 The two-toned punch of spiced cake and spiced powder makes these incredibly successful and a worthy shakeup from the usual donette.  Whether it be Tastykake or Hostess or Little Debbie I’ve never found any flavors of mini donuts to be truly worth it aside from the classic powdered or chocolate, but these ones give both of those a run for their money.  More complex than any that have come before them but equally satisfying in their junky splendor, these Gingerbread ‘nuts are a slam dunk worthy of your Christmas calories.