Frosty the Snowman is my dude. I’m not sure if it’s normal for kids to latch onto Christmas characters like they would superheros or athletes, but as a youngster I certainly did, and Frosty will forever hold a place in my heart. Every time he came back to life was another chance for a birthday party, and birthday’s mean cake, and cake means fun, and thus, Frosty beats Rudolph. While the latest seasonal release from General Mills may not have an actual Frosty tie-in (Frosty has a button nose and is always smokin’ a pipe), it is proudly reppin’ one of his relatives, and my internal nostalgia switch began to melt as soon as I saw the swirly blue box for Cinnamon Vanilla Lucky Charms.

I’m gonna cut straight to the chase on this one – these Lucky Charms are not that spicy. The flavor is nearly identical to the established one kids (and adults?) have been chowing down on since 1964 – slightly sweetened toasted oats and crunchy dehydrated marshmallows. The key difference here is mostly aesthetic, as the usual array of rainbow colors have been replaced by cool wintery shades of blue and white. Snowmen, snowflakes, and snowballs cheerily swim in milk channeling a cool December day instead of the multicolored ending of a leprechaun hunt.

I’m kind of surprised the cereal pieces don’t have any bite, since the box touts “frosted cinnamon oat cereal” very proudly, and I get zero cinnamon. That being said, there is a bit of cinna-flair in the marshmallows. When I get a spoonful with three or more winter-clad ‘mallows I get a sweet hit of cinnamon, but it’s very brief, and nowhere near the intensity of Pumpkin Spice Cheerios, Gingerbread Spice Life, or Cinnamon Pebbles. As for the vanilla, I think it goes without saying marshmallows have a vanilla-y flavor automatically, and I don’t detect any more or any less vanilla than I normally would from a box of Charms.

Look, this cereal may not have the big cinnamon flavor that I had hoped for, but I cannot deny that Lucky Charms are still, in fact, magically delicious. The slight presence of spice in the marshmallows takes nothing away from the original recipe, and adds just a touch of holiday whimsy the ‘mallow-heavy bites. I’m slightly disappointed but I’m charmed by Lucky, and I’m a sucker for anything with cinnamon in it, even if it’s just a gentle whisper. 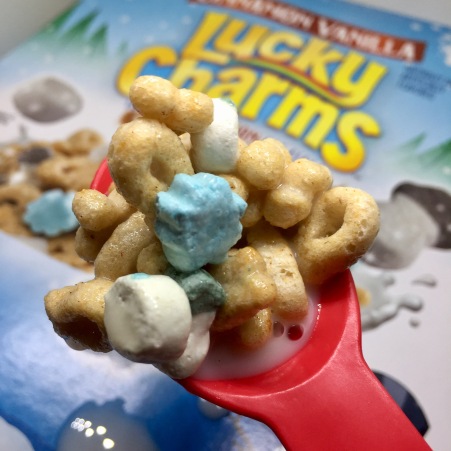 John Carpenter’s Halloween created my favorite film franchise of all time, so when I was approached by @lifesabaatch with the opportunity to contribute to her annual halloween drop I knew immediately what had be done. Michael’s Murderous Treat is a deadly dark salted chocolate cookie mixed with dark chocolate chips, Reese’s Frankencups and Butterfinger pieces, stuffed with blood red vanilla buttercream and topped w/ red chocolate and a candy knife. ⁣
Fall flavors have arrived for scoop shops everywhere and things have gotten EXTRA spooky at @saltandstraw with the introduction of black waffle cones and the brand new Jack o’ Lantern Pumpkin Bread. While Jack o’ Lantern may not be as legitimately frightening and unique as past staples like Dracula’s Blood Pudding, it is without a doubt a whole helluva lot more tasty. The description on Salt & Straw’s website is classically cryptic and creative but the ice cream is essentially a lightly spiced brown sugar cinnamon base with chunks of pumpkin bread and swirls of whipped cream cheese frosting.⁣
The best collab since the Reese’s Lovers Original Filled in 2019 has arrived at @krispykreme. Check out my full breakdown of the Cinnamon Toast Crunch Cinnamon Roll today on @theimpulsivebuy! ⁣
The moment I’ve been waiting my entire life for…a maple glaze at Krispy Kreme! Maple is one of the greatest doughnut toppings and prior to this week KK have only offered a maple frosting on top of their already glazed doughnut, which is fine but it’s a bit of a hat on a hat. This new glaze changes that and does it really well. ⁣
I finally got around to trying the Crazy Calzone from Little Caesars and ya know what? I really enjoyed it! The latest novelty item from Mr. Caesars has what looks like a mini pizza in the center surrounded by little exploding calzones on the sides, which also ends up looking like something from Alien or THE THING. The calzone-like crust is filled with a white garlic sauce, cheese, and thick julienned sausage-like chunks of pepperoni. Essentially this is stuffed crust pizza on steroids, and I’m here for it.
Apologies for the lack of variety recently but hey, there’s a NEW doughnut at Krispy Kreme, and an all new glaze at that! Apple Cider Glaze doughnuts are available for one week in Original, Original Filled with Brown Sugar Kreme, and Cake. I got the Original Filled because, why not??
Loading Comments...
%d bloggers like this: