Nostalgia is a helluva drug. Nostalgia probably drives 90% of my interest in limited edition snacks and junk food in general, dating back to those care free childhood days of packed lunches and water balloon fights. There are cherished snacks that have hit the graveyard, like my beloved Dunkaroos and Sonic Sour Cream Doritos, but every so often a formerly RIP’d product gets brought back to life. Bless the golden god’s of the cereal aisle because one of the all time greats is back – Post Oreo O’s.

I could never explain exactly what Oreo O’s tasted like, but on my first bite in they taste exactly how I remember them tasting fifteen or twenty years ago. The novelty of this cereal when it first came out was “holy shit I’m eating cookies for breakfast” and while that thought still somewhat rings true in my mind, I have a greater appreciation for the cereal now that I can lock in on how it actually tastes.

The flavor of Oreo O’s is incredibly unique for a chocolate cereal, and much like the actual cookie it’s modeled after, carries a distinct flavor and texture that rings cookies and cream bells in the deep nostalgia-ridden parts of my brain. It might sound redundant, but Oreo O’s truly taste like Oreo’s mixed with cereal. More specifically, the flavor is a nice mellow and very sweet cocoa with smooth vanilla undertones reminiscent of frosting. They’re great on their own but amplified to more resemble the melty filling when combined with milk. Oreo O’s are one of the rare cereals that perform equally well eaten by the hand as a snack or served classic style in tandem with cold creaminess that carry a longlasting crunch that doesn’t get soggy too quickly. 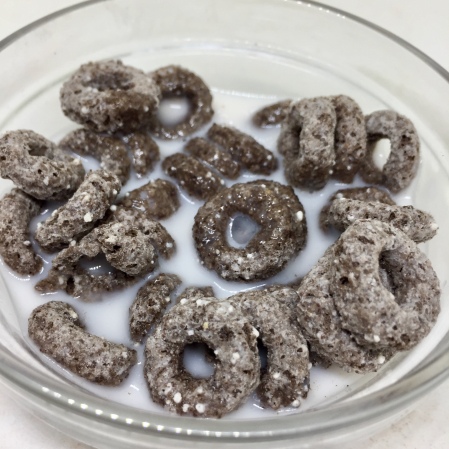 The circular cereal pieces are studded with little white dots that give an interesting crunch-against-crunch textural contrast like a much firmer and better version of Apple Jacks. The little white studs carry the crème flavor of the cookie sandwich profile, and while they aren’t creamy, they do create a different sensation than if the pieces were simply smooth like Cheerios.

It’s hard to say why Oreo O’s disappeared for such a long time, but it certainly wasn’t because the cereal sucked. It’s an amazing feat for a product to taste exactly as I remember from my youth, and I wasn’t let down in the slightest by the rebirth of one of my favorite morning treats. Given the insane amount of limited editions Nabisco have been cranking out the last couple of years it’s only fitting that Oreo cereal is back on shelves, and maybe we’ll even see some limited edition Oreo O’s in the future. Hot & Spicy Cinnamon Oreo O’s, anyone?