If Halo Top are going to stake the claim as the best selling ice cream pint in 2017, then my god the big dawgs better come to play. I have nothing against Halo or any of the lighter dessert options that have exploded in recent years, but if they’re going to take command over the market and shelf space away from the rich beautifully crafted ice cream of my dreams, then it’s up to the titans to respond. There’s no bigger player in the vast grocery ice cream game than Ben & Jerry’s, and to kick off a loaded 2018 lineup of decadent pints, they’ve also rolled out a new line of light ice cream’s called Moo-Phoria. This is not the protein-enriched artificial sweetener-leaning stuff that’s dominating the frozen aisle right now, but a lower sugar, lower fat alternative that hints towards some of B&J’s staples.

As the originators of the chocolate chip cookie dough ice cream it’s only fitting that Ben & Jerry’s launch their new light line with a flavor that highlights their expertise in America’s obsession with unbaked cookies. The chocolate ice cream is impressively dark with a very pronounced cocoa powder intensity and menacingly deep color, but falls a bit flat in the texture realm. While it doesn’t suffer from the airy-ness of other light ice creams it finishes with a watery consistency that reminds me of a Fudgesicle without the creaminess. The base isn’t awful, it’s just lacking some of the depth that I want from a frozen treat, and I think in this case I prefer the more whipped light ice cream that Dreyer’s makes with more creamy finesse than this semi-icy attempt. 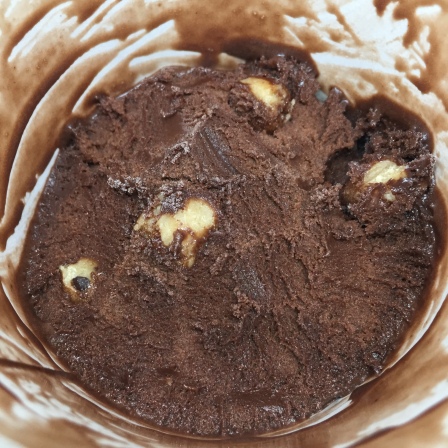 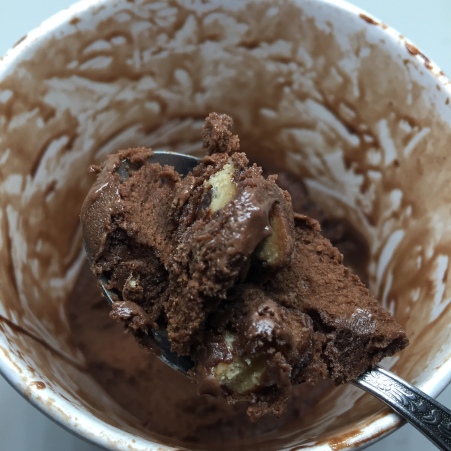 P.B. Dough just feels like it’s missing something. As much as I’ve got a little burnt out on the fudge flakes, some chocolate chips or an additional cookie crumble of some sort could have really helped break up the relatively bland presence of the base for a more exciting scoop.

UPDATE: I decided to rescoop this one when it went on sale and had a much better experience the second (and third, I won’t lie) time around. The base was exceptionally smooth, and when paired up with that great dark chocolate flavor was really satisfying. I also got way more gobs of PB dough that made the whole experience more exciting than the first pint, which I think may have been a rare outlier experience for Ben & Jerry’s. I originally gave this one a 7 out of 10 but it is much much better than that. 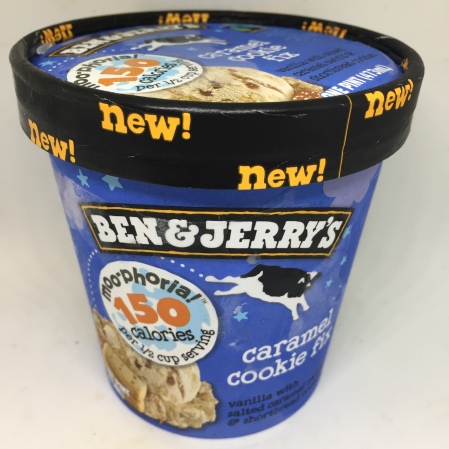 Spoiler alert: Caramel Cookie Fix is one of the best light ice cream’s I’ve ever had. The base is smooth and decently rich with a really bold vanilla flavor that surprised me. In fact, the vanilla extract flavor is almost too aggressive, but the intensity faded after a couple spoonfuls and settled to a more manageable profile that’s very sweet and classic tasting. The texture carries none of the fluffiness that can sometimes plague lower calorie offerings but also doesn’t feel too thin.

The best part about this pint is that it actually mirrors the experience of real Ben & Jerry’s. My container was chock full of mix-ins and swirl that lasted from the beginning all the way until the end. The shortbread cookie pieces are very reminiscent of the ones in Keep Caramel and Cookie On, but somehow softer and much more prominent against the intense vanilla backdrop. They’re chewy and of very honorable size with a nice buttery aura that truly tastes like a shortbread cookie submerged in milk.

The salted caramel swirl is thin and sweet with just a hint of saltiness that elevates it beyond your average ribbon, especially for a light ice cream. While I could tell that this wasn’t as lush as the usual B&J’s ice cream, I never felt like I was eating something “diet” and the lack of any weird artificial aftertaste or gummy mouthfeel made it truly enjoyable and something I would absolutely scoop again.
Rating: 9/10

So what happens what you combine the okay light chocolate ice cream with the good but a little extract-heavy vanilla? More moo-phoric magic. The weaknesses that each base have on their own get better balanced and become less of an issue when combined into one pint. I’m usually pretty wary of how two different ice cream’s will interact with each other but here they do a great job of striking the right levels of texture and flavor to deliver a very satisfying light ice cream experience.

Much in the same way Caramel Cookie Fix felt like an actual pint of B&J’s with its density and mix-in fun factor flair, Chocolate Milk & Cookies comes through with Moo-Phoria’s strongest element in the form of legit chocolate chip cookies. 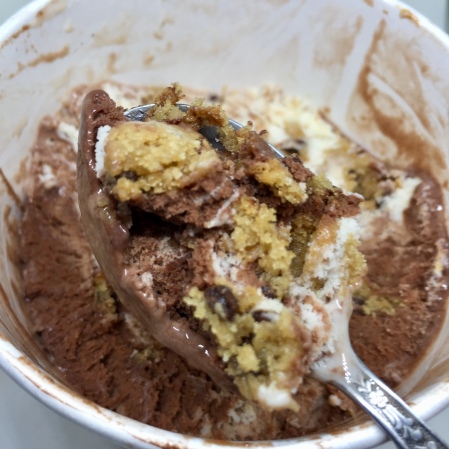 Very similar if not identical to the chunks found in Ben & Jerry’s terrific staple Milk & Cookies, the pieces are soft and chewy with a gorgeous buttery brown sugar flavor that shines against the light ice cream like the truth. The chocolate chips snap with lovely dunked-in-milk texture and make for one of the greatest mix-ins I’ve ever had in a light ice cream – and in good quantity to boot. The cookie chunks popped up in the beginning of the container and survived my aggressive digging all the way to the bottom of the pint. Delicious.

Overall I am very impressed with the Moo-Phoria line, and Ben & Jerry’s have really advanced the light ice cream game to new levels. The flavors are fun and executed very well. My only hesitancy is with the price point. While there’s no doubt this is a higher quality product than what it’s competing with in Edy’-Dreyer’s and especially Breyer’s, it costs the same for less than half of the usual 1.5 quart size those brands come in. But when all is said and done, you really do get what you pay for.

*note: I graded these on a light ice cream scale in line with their competition, not against the usual B&J’s offering that has twice the calories and three times the fat*