Ben & Jerry’s have once again opened their coveted Special Stash to unleash a rare and limited edition pint only available at scoop shops and online. Much like the first release, Marshmallow Moon, which was one of the alternate ideas for Jimmy Fallon’s signature flavor, It’s…Ice Cream is one of the combinations originally considered for the now infamous and hugely popular Phish Food. Unlike its battle-winning older sibling, which swirls together caramel and marshmallow in the murky depths of double chocolate, this flavor gets a little more of a balanced lift from caramel malt ice cream with almond toffee pieces, fudge fish and a caramel swirl. 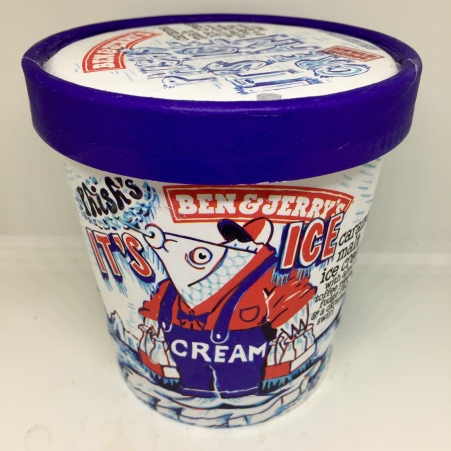 This pint is a lot like an epic medley in the middle of a four hour Phish concert – a bunch of elements I’ve already had and enjoyed in separate instances all fusing together to create a new unique experience. We’ve got the base from Keep Caramel and Cookie On, the fish and caramel swirl from Phish Food, and some almond toffee that reminds me a lot of the terrific brittle in the Non-Dairy Caramel Almond Brittle. 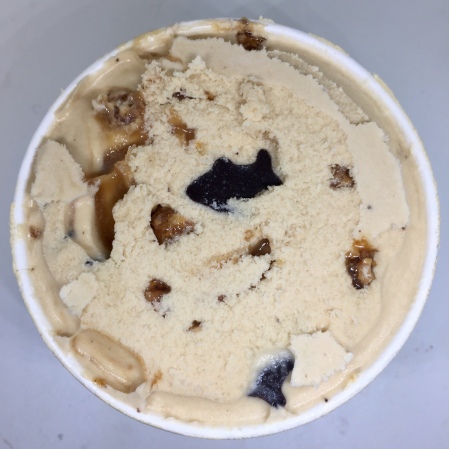 I feel pretty much the same about the base here as I did in Keep Caramel, which has a solid malty funkiness and subdued sweetness compared to a lot of other caramel bases. Ben & Jerry’s don’t make the best caramel ice cream’s but they tend to surround them with things that make them work well. Cinnamon Buns is a prime example of an ice cream that’s just okay at its core but terrific taken as a whole. My favorite B&J’s caramel base is the coffee caramel in One Sweet World, and while this base isn’t as exciting, I’m getting Phish-induced flashbacks to one of my favorite Limited Batches of the last few years, and that’s a very good thing. 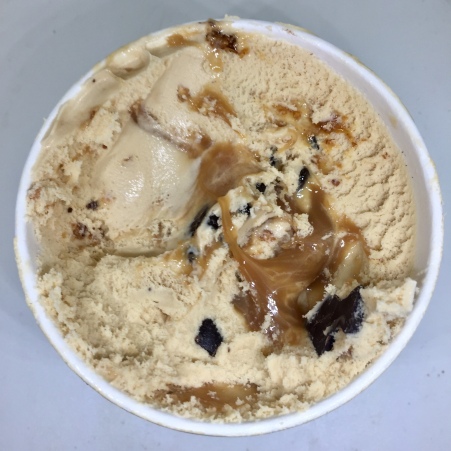 The ample pools of sweet syrupy caramel all throughout the pint help elevate the base and bring out the malty funk even more, achieving a great balance of overall sweetness. There are moments throughout digging that a glob of caramel takes up my entire spoon, and I will never tire of that simple pleasure. The chocolate fish continue my theory that B&J’s chocolate is so much better in shapes than in chunks and I love their fudgey density and firm snap. Plus, it’s a helluva lot of fun popping open a pint that looks like there are fish swimming in a sea of caramel-colored delight.

The real game changer in this pint are the wonderful pieces of almond toffee, which chomp and crunch with a bold buttery flavor and sparks of salt that help temper the caramel for that lovely tandem of sweet and salty I simply can’t get enough of. The pieces are different than the chocolate covered variety in Vanilla Toffee Bar Crunch (formerly Heath) and really provide a great nutty character that brings the depth and necessary variety to bites that really set the flavor apart. 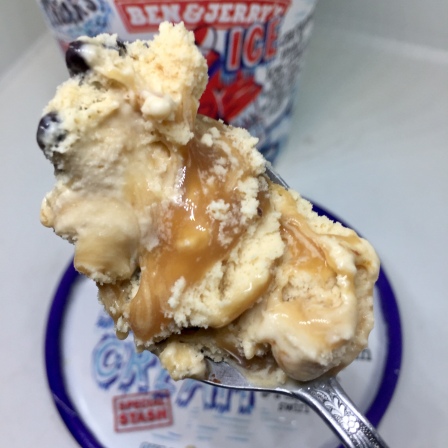 With both of the first two entries into the elusive Special Stash collection being rejects of already existing flavors, I’m pretty intrigued to see where this line will go next. While I found Jimmy Fallon’s Marshmallow Moon to be a pretty inferior option to the chosen Tonight Dough, when it comes to this versus Phish Food it’s a much tougher debate. There’s no doubt that this one is more unique and satisfies my sweet and salty craving’s, but there’s nothing quite like diving into that dark swirly abyss of the classic Phish Food. Although it’s not as easy to get as some of the great core flavors, this one is worth the extra trip or online order, and I’d recommend grabbing an extra one to toss in your stash for a repeat scoop.